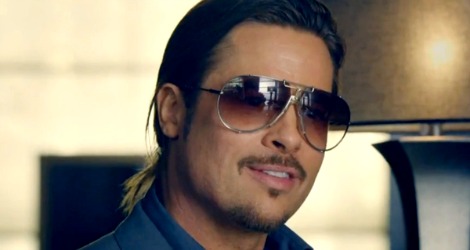 “If your definition of a friend is someone who would die for you … you don’t have any friends.”

A teaser trailer for Ridley Scott’s “The Counselor” hit the web today, and while there isn’t much dialogue, that doesn’t mean there’s not a lot going on, including Brad Pitt with a slicked back ponytail, Cameron Diaz in a cheetah dress, and that Cormac McCarthy vibe.

Not much is known about the film, due in theaters Oct. 25, 2013, but with an amazing cast and a script penned by author McCarthy, expect big things. The story centers on a lawyer (Michael Fassbender) who gets involved in a drug trafficking scheme involving a number of unsavory characters. He soon finds himself in way over his head.

It’s McCarthy’s first original screenplay, but we’re familiar with his previous adaptations like “All The Pretty Horses,” “No Country for Old Men” and “The Road.” It appears that “The Counselor” will continue his trend of focusing on desperate people, corruption and various forms of violence. Previously, he adapted his book, “The Sunset Limited,” for an HBO TV movie.

This is the second pairing of Ridley Scott and Dariusz Wolski, but promises to be much, much, much better than “Prometheus.” However, one thing I loved about that film was the gorgeous visuals, and it looks like we’ll be getting more of those in “The Counselor.”