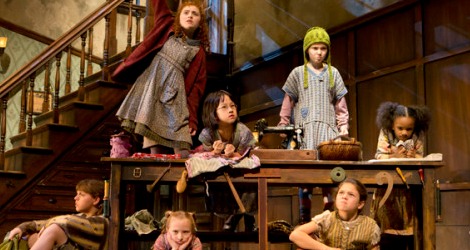 Filmmaker Joshua Seftel (see Jane’s interview with him about his “My Mom on Movies” project) followed the cast and creative team of Broadway’s revival of the musical, “Annie,” and created a fun behind the scenes look at the making of a Broadway show.

Focusing on the song, “It’s the Hard-Knock Life,” the documentary shows part of the audition process, including footage of some of the little girls when they learned they had been cast. The film chronicles the difficulties of staging a revival, especially one that is populated with children who have never done anything like it before. It’s hard enough to launch a Broadway musical with veteran actors, but how do you teach all of these little girls the songs and choreography in time for a flawless performance on opening night? And should the creative team stay loyal to the original production or veer off into a new direction?

The young stars are interviewed, as well as choreographer Andy Blankenbuehler, costume designer Susan Hilferty, and set designer David Korins. The result is a fascinating look at the work involved in staging a production of this magnitude. It will give you a new appreciation for the Broadway musical.

Called “Annie: It’s the Hard-Knock Life, From Script to Stage,” the documentary airs on PBS on Friday, June 28, 2013. Check your local listings for the times in your area.