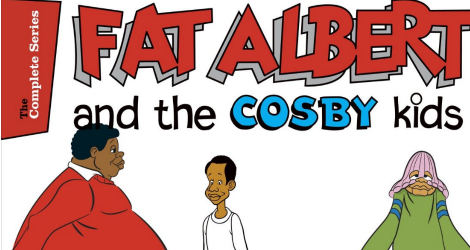 Hey, Hey, Hey! Even our kids know that little catch-phrase, and they didn’t grow up with “Fat Albert and the Cosby Kids.” The complete series of the pop culture icon TV series was released by Shout! Factory on DVD June 25, 2013. It’s not rated and includes 2340 minutes of fun.

The 15-DVD set includes all 110 episodes of the classic television series created, produced and hosted by legendary comedian Bill Cosby, along with a 16-page book and the documentary “Hey, Hey, Hey … It’s The Story Of Fat Albert,” featuring an all-new interview with Bill Cosby.

Buy “Fat Albert And The Cosby Kids: The Complete Series”

The show follows the rotund Fat Albert and his friends growing up in 1970s urban America, which makes it not only entertaining, but also an important slice of American history. Especially for kids like me who grew up on a farm in rural Michigan and knew nothing about inner city life.

And the Fat Albert crew always  stuck by each other, no matter what came their way, be it an awkward growth spurt or a lack of athletic ability. It showed that kids were pretty much the same and dealing with the same stuff all over the country.

Fat Albert and the Cosby kids had a powerful impact on people across the country, entertaining and educating millions of kids and families while always fostering lessons in life, which were reinforced by Cosby’s live-action hosting segments. The show was way ahead of its time, and more than 40 years after its original premiere in 1972, it still is.

“I am stopped all the time,” says series creator, Bill Cosby. “Grown-ups say to me, ‘My 8, 9 or 10-year-old son or daughter has discovered Fat Albert, the same way I did at that age.’”

“Fat Albert and the Cosby Kids: The Complete Series” is available on Amazon