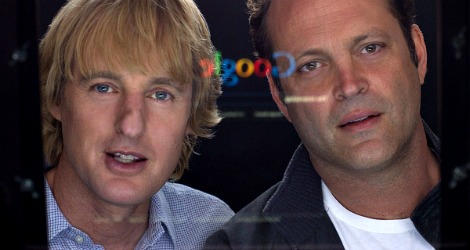 New in theaters today are Owen Wilson and Vince Vaughn (together again!), a scary “all crimes are legal” thriller, and a new movie from YA author Judy Blume. Take a look…

“Wedding Crashers” duo Owen Wilson and Vince Vaughn re-team for this Shawn Levy-directed comedy as two out-of-work salesmen who have to compete against an army of younger interns for a job at Google.

I don’t even care if (so far) the reviews for this movie are so-so; I’m just geeked about seeing Wilson and Vaughn on the screen together. Love both of them.

Rated PG-13 for partying, language, sexuality and some crude humor.

One night a year when all crime is legal? Yep, that’s scary. And just the scenario that finds a family living in a gated community fighting to defend their home against vicious attackers in this thriller from writer/director James DeMonaco.

In the not-too-distant future, rampant crime and prison overcrowding have inspired the U.S. government to implement a unique solution to restore the peace: Each year, for a 12-hour period, any and all crime becomes permissible as police put their jobs on hold and hospitals close their doors. It’s called the Purge, and remarkably, the annual event leads to drastically reduced crime and record-low unemployment levels throughout the rest of the year.

But this year, as suburban parents James (Ethan Hawke) and Mary (Lena Headey) place their home on lockdown for the annual event, a desperate man finds his way into their neighborhood while fleeing a sadistic gang of masked killers. In a moment of compassion, James and Mary’s adolescent son (Max Burkholder) unlocks the door, offering sanctuary to the frightened stranger. Unfortunately for the entire family, that act of kindness may also be their very last, because now the killers who were pursuing the man have surrounded the house, and have vowed to kill everyone inside unless they are willingly given the man they are hunting within an hour.

Rated R for strong disturbing violence and some language.

MUCH ADO ABOUT NOTHING

In the wake of an eventful trip abroad, Claudio (Fran Kranz) and Benedick (Denisof) arrive safely back in their hometown of Messina, where Claudio wastes no time declaring his love for Hero (Jillian Morgese). Alas, when clever Benedick learns that his friend has poured his heart out to the daughter of powerful governor Leonato (Clark Gregg), he chides his old friend relentlessly over the syrupy assertion while engaging Leonato’s outspoken niece Beatrice (Acker) in a series of spirited debates.

Meanwhile, somewhere amidst all of the pointed insults and playful barbs, something that strangely resembles true love seems to blossom between Benedick and Beatrice. Nathan Fillion, Reed Diamond, and Sean Maher co-star.

Rated PG-13 for brief drug use and some sexuality.

WISH YOU WERE HERE

Screen veteran Kieran Darcy-Smith (“The Square,” “Animal Kingdom”) makes his feature directorial debut with this ambitious non-linear drama centering on a group of Australian friends whose lives are irreparably changed after one of them goes missing during a spontaneous vacation in Cambodia.

Alice (Felicity Price) and Dave (Joel Edgerton) are about to become new parents when they agree to join Alice’s little sister Steph (Teresa Palmer) and her new beau Jeremy (Anthony Starr) on a sun-soaked trip to Cambodia. Their tropical retreat quickly turns bad, however, when Jeremy vanishes without a trace.

As the investigation into Jeremy’s disappearance begins to reveal the nefarious motivations behind their trip, the remaining three struggle to carry on with their lives in Sydney amidst the threat that even more damning details will emerge.

A teenage girl who’s struggling with her sense of self befriends an enigmatic Native American man who helps her to move beyond a family tragedy and embrace her true identity in this coming-of-age drama based on a story by Judy Blume (who collaborated on the screenplay with her son, director Lawrence Blume).

Feeling lost in the world following the death of her father, 17-year-old Davey (Willa Holland) subsequently finds herself living in Los Alamos, New Mexico, with her Aunt Bitsy (Cynthia Stevenson). Socially awkward and unable to connect with her peers, Davey begins exploring the canyons around her home and meets Wolf (Tatanka Means).

Wolf is a kind soul who can recognize the pain in Davey’s eyes, and his compassion and wisdom helps to draw out the strength hidden deep inside the grieving girl. The more Davey learns about life, love, and loss, the more she begins to realize just how valuable they are in a world where everything is temporary.

Rated PG-13 for a violent incident, thematic material and some teen drinking.