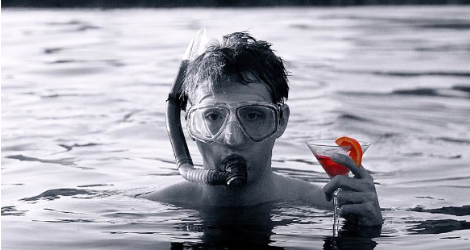 Let me preface this review by saying I’m not a huge fan of Amy Acker or Fran Kranz (though Kranz grew on me over the duration of “Dollhouse”), though I have loved pretty much everything Joss Whedon has done over the years.

That said, I had high hopes that Whedon’s modernized version of “Much Ado About Nothing” would be much ado about something.  Alas, the film lived up to its name.

The movie follows Shakespeare’s comedy about two romances — one between verbal sparring partners and confirmed bachelor/ette Benedick (Alexis Denisof) and Beatrice (Amy Acker), and one between young lovers Claudio (Fran Kranz) and Hero (newcomer Jillian Morgese).  Benedick and Beatrice are tricked into confessing their love for one another while Claudio is tricked into rejecting Hero by the villainous Don John (Sean Maher).

While not a bad adaptation, I prefer the Kenneth Branagh version much more. I think, partly, I was distracted by the actors in the film. I spent the better part of each scene figuring out “Where in the World of Joss Whedon?” had each actor appeared. Were they from “Buffy the Vampire Slayer”? “Angel”? “Dollhouse”? “The Avengers”? Once I figured out who was from where, I then wondered what other Whedonverse actors would pop in for a cameo.  Where was Nicholas Brendan, Emma Caulfield, James Marsters, Tahmoh Penikett, Jewel Staite or Summer Glau? They must have had prior commitments. (Anthony Head was originally supposed to play the role of Leonato, but was unavailable.) Although, I’m sure glad Felicia Day was nowhere to be found. Had she been cast in Acker’s place, I probably wouldn’t have gone to see the movie at all.

The other part was the modern-day setting against the 16th century words of The Bard. It just wasn’t working for me.

Even though Branagh’s version is now 20 years old, I think it still holds strong and true to The Bard’s story of the erstwhile lovers, Benedick and Beatrice. Granted, Branagh’s 1993 version had a much larger budget, sweeping soundtrack and beautiful locations, but the film took me to that time and place, whereas Whedon’s did not.

What is amazing about Whedon’s version is that it was filmed in a mere 12 days at his Santa Monica, California home. Whedon also scored the film, as well as arranged music for two of the songs in the film. My other issue? Not enough Nathan Fillion. It was a shame the role of Dogberry was minimal to the entirety of the story. He did leave his mark in the scenes that he was in to much comedic effect.

This was a film I could have (and should have) waited for Redbox or Netflix to view.

I probably just ticked off the whole of the Whedonverse. Alas, as Shakespeare wrote, “No legacy is so rich as honesty.”

Watch this amusing video from Brian and Nick (@BriTANick), the only two actors that had no prior experience with Whedon.

Have you seen Whedon’s “Much Ado About Nothing”? What did you think of the film?