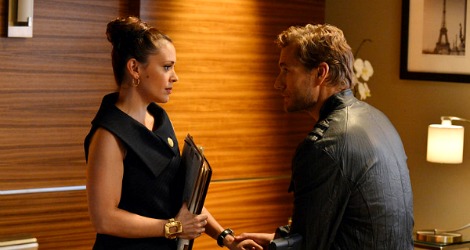 The “Mistresses” pilot left off with a lot of trouble for the girls. Savi cheated on Harry with her co-worker Dominic (in a weak moment). Karen is dealing with the death her patient (and married lover). April found out her dead husband had a child with another woman. And Jos being a party girl just added some fun to the mix. I’m already tired!

Episode two starts with Savi crying in bed and then the bathroom, feeling very guilty about cheating on Harry. She knows she did something that can’t be undone, and contemplates telling him … oh boy, that’s a road I wouldn’t want to go down!

Karen and Savi meet. Karen tells Savi that Sam (Tom’s son) wants to talk. Savi tells Karen not to call or talk to him because her law firm is investigating Tom’s death, and Karen was prescribing lethal doses of morphine and having an affair with him. Not good.

April shows up and is very upset (obviously) that her dead husband Paul, had a “secret life” while they were married. She blurts out to the girls, “Paul had a baby with another woman.” Savi and Karen are shocked (although they had affairs – hum). Savi tells her to find out if it’s true before she does anything – of course that’s a good idea.

Later, Savannah tells Karen that she slept with Dominic and that’s she’s horrified with herself! She wants to tell Harry, but Karen says to wait, not to rush to tell him.

And Jos, I am not sure about her role. She doesn’t really do much for the show yet, except portray the party-girl sister. And now she is staying with Savi and Harry until she can find a place. She does notice something is wrong between them and wants Harry to tell her. “Tell me everything … just the important parts,” she says. She’s sort of funny, but I’d like her character to get a little deeper.

April and Savi meet. Savi did some digging and has a file with information about the “woman” in question. They realize that she worked at the hotel where Paul stayed on business trips in Orlando … oh great, here we go. April is very upset, and Savi is feeling guilty … she tells April about Dominic. April is not happy hearing that and tells Savi she shouldn’t have told her. She’s mad, and I don’t blame her.

April goes to spy on the woman, but doesn’t do anything. She sees her and her son get into a small yellow SUV … more later.

Jos meets her client (lesbian couple looking for a house), and tells her client she needs to be more aggressive, and not let her partner make all of the decisions. That’s not really appropriate for a real estate agent, right? Back to April (the scorned wife), who looks through Paul’s papers. She finds a business card from a car dealership in Orlando and calls. The man who answers tells her that Paul bought a yellow Ford Escape – great. April can’t believe it and picks up a photo of Paul and hurls it across the room! I would do more than that.

Now Savi, back at the firm, and confronts Dominic, telling him they made a huge mistake, and it can’t happen again. He says to her, “You kissed me first Savannah.”  Nice buddy, but you were flirting with her all of the first episode!

Cut to Karen and Sam having coffee. He wants to show her something – a trophy from a game. He tells Karen she helped him (some advice she gave him in the first episode). Everything went well, but when she leaves he spills his drink on her. No big deal … at least for now.

Back to Savi. Harry comes to her office and apologizes for the way he’s been acting (he should), and all is good. Dominic comes in, they shake hands, and he leaves (Savi is uncomfortable, of course). Harry says the doctor said their problem isn’t that serious. They should keep trying to have a baby. I can see what’s coming, can’t you?!

Back to crazy Jos. She and the client go to look at a house. Jos opens up some drawers in the owners bedroom (great) and finds some Japanese sexual bondage ropes … that was funny … of course, later, she is using it on a guy. I did laugh at that, didn’t you?

Now things start getting sticky. An insurance investigator (for Tom’ death) questions Karen. She explains that he was seeing her for insomnia. He wants to know why that took three years. She is nervous, and she should be.

The woman that Paul was having an affair with comes to see April. April is not happy she’s there. The woman says, “I want my son to have what your daughter has, I want money.” Of course, it’s always about money. Thanks, Paul!

Now the awkward scene with Karen and Sam. Sam stops by her office to pay her for dry-cleaning her dress, but she sort of loses it, and it catches him off guard. She wants him to leave and not call. He is a little hurt and offended. I think she is concerned about the problems that may lie ahead – yeah, no kidding. In the last scene, Savi and Harry discuss their sex life and baby plans. She does admit to him that she isn’t ready yet. He understands and they start to get romantic. They are on their bed, and her phone rings. You know who is calling (Dominic), but she doesn’t answer. I can guess what will happen. She will get pregnant, and won’t know who’s baby it is.  Yikes!

There you have it. Another drama filled episode. I still say it is for the younger crowd. What do you think?

Are you watching “Mistresses”? What do you think of this episode? Leave thoughts below.