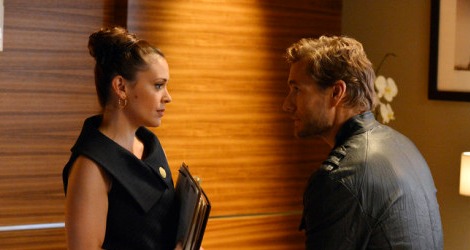 Okay, we’ve now seen the third episode of “Mistresses,” and are  getting to know the characters better. Each is different and brings their own vibe. The character that I thought didn’t bring much (Joss) is now possibly my favorite. She is so irreverent, and she makes me  laugh out loud with her one-liners.

There is a lot going on in this episode. Harry and Savi are working on their relationship. They have a hot bedroom scene to start the show off – whew!

April’s daughter and her friends are over at the  house having fun. Richard (who has asked April out twice and been stood up both times) comes to the door to pick up his daughter and another girl. It’s awkward for them. She tries to explain why she stood him up, and he finds out she is a widow. He doesn’t ask any questions, just gets the girls and leaves. April feels silly now.

Karen is still trying to deal with Tom’s death, and with Sam, for that matter. Elizabeth, Tom’s widow, visits Karen in her office and tells her that Sam has dropped out of college and needs a shrink. Of course, Karen is thinking, “not me!”  She says she will refer someone.

Back to my funny girl Joss. Wasn’t that funny when she was in the elevator and the kid looks at her very short skirt, and his mom says, “Get a longer skirt,” and my girl Joss says, “Get a taller child.” Loved it!

Later, Joss finds out that the real estate company she works for has been bought out, and the new boss is a  condescending French man (Olivier). Now, we all know Joss will be whipping him into shape, don’t we? Take no prisoners, girl!

Meanwhile, Savi is working on a case with Dominic that is going to require working nights … of course it does. She isn’t comfortable with the situation. During the evening, Dominic looks at Savi’s cleavage (bad boy – but he is quite handsome). Savi ends up telling him she wants things to go back to the way things were.

Later in the episode, Savi tells her boss she wants off the case because there are too many “hands” on it. She thinks things are okay now … as long as she doesn’t have to work so close to Dominic. I wonder if she doesn’t trust herself …?

Joss stops by to talk to April. She tells April about Olivier, and April tells Joss she was snubbed by Richard. Joss reminds her that she did stand him up twice without an explanation (most guys wouldn’t ask a girl out again after being stood up TWICE!). Joss gets a message from Olivier, “Oh, I knew he’d come around.” Funny. He wants to meet her at a hotel … and of course she will be there!

When she meets him at the hotel for dinner, Olivier (who has taken half of her inventory and distributed it to her co-workers), wants to see if she can sell a crazy modern house built by a celeb … in a week. You know by now that she can do it, right?

What the … Savi and Dominic have sex in the office again … and Harry see’s them! Whoa!  Thank goodness, it was just a dream!

Later, Savi asks Harry if he wants a second honeymoon. She is really worried, or maybe just working on their marriage. What do you think? Anyway, he gets a little mad (he sort of has a short temper) and tells her they are in way too much debt with the restaurant, etc. She does tell him how happy she is … boy, does she regret what happened with Dominic. Karen, Karen … she decides to go to Tom’s apartment to see if she has left anything behind. I was sure there had to be something. Of course when she arrived, my heart-rate started to climb, knowing she had to get caught — and of course Sam comes in … since he does live there now!

She barely escapes, but leaves her sunglasses (that’s shocking), which she couldn’t grab in time. I can feel something is going to happen between Karen and Sam. Later, Karen tells Savi and Savi can’t understand why Karen just doesn’t stay clear of that family. It turns out she is still in love with Tom. That’s what I got out of it. Doesn’t she realize he’s dead?

Now to Karen at her office, late. Jacob (a colleague) is there … again. (I wondering what is up with them.) They discuss how they are workaholics, and need a life. I thought it was good that she invited him to the party Joss was throwing at the modern house (for brokers and potential clients, of course).

Savi arrives home, and Harry is just leaving. The doorbell rings (luckily just after Harry exits), and who is there? Oh yes, we knew, didn’t we – Dominic.  But it was a social call — he was kicked off the case, and it was given to someone else. He isn’t happy, and Savi feels bad. There are lots of consequences when bad judgement is made, right?

Party time! The party/open house is rockin, and lots of clients, brokers, and other invited guests are there … including Richard. What the heck, April is surprised. They end up going out on the deck to talk. He is a sports writer in L.A., and he brought Lamar Odom with him. Wow (although we didn’t see him). He tells April he can feel she has issues to resolve regarding her dead husband, and can’t get involved right now – see ya! Ouch.

Karen is there with Jacob. They are having a good ole time, but of course, she gets a phone call and it’s from Sam. Ugh. He has been in an accident and needs someone to pick him up from the hospital. He was under the influence. After she rescues him, he tells her that he found a pair of women’s sunglasses in his dad’s apartment. He gave them to his mom, and his mom tells him they aren’t hers! Now she knows that Tom was having an affair. Way to go, Karen!

Back to the party. Olivier arrives with a date and gives Joss a little grief about the expense. Happily, she tells him she has three offers (so there!), and it should raise the price about $100,000! Good job, Joss … she walks off smiling, and he has a little smile on his face.

I knew he would like her tenacity, toughness, and “I do things my way” attitude! Will they get together next episode or wait a couple?

Okay, last scene … Savi is in her bathroom and looks at the results of her pregnancy test.  OMG – who is the father going to be?!

There you have it. I am actually having fun now watching this series. It’s sort of like eating candy.

Are you watching “Mistresses”? Leave comments below.