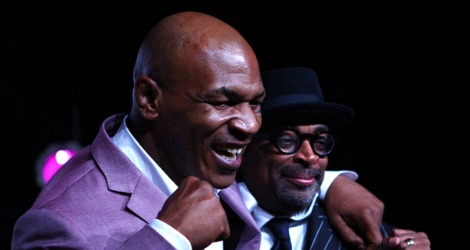 Former heavyweight champion Mike Tyson and “Malcolm X” filmmaker Spike Lee will team up to bring Tyson’s one-man stage show “Mike Tyson: Undisputed Truth” to HBO. The program will be filmed in New York in July and will debut on the network later this year.

“I’m incredibly grateful to HBO for partnering with me and for believing in my story,” said Tyson. “It is an honor and a privilege to be working with them to bring my one-man show, ‘Undisputed Truth,’ to life on the television screen.”

“It was my honor and pleasure to share with Mike Tyson our Broadway debut,” said Lee.

“Mike Tyson’s one-man show is a fascinating journey into his storied life and career, and we are thrilled to have Spike Lee bring it from the stage to the screen for our viewers,” said Michael Lombardo, president of HBO Programming.

The stage production of “Mike Tyson: Undisputed Truth” features “Iron Mike” recounting his life’s highs and lows in his signature candid style.  He opens up about his troubled youth, landmark boxing career, key people in his life, controversies, time in prison, self-examination, family and new beginnings.

“Tyson” had a limited run on Broadway last summer with Lee directing. It also recently wrapped up a ten-week U.S. tour, which debuted in Las Vegas in spring 2012.

The show is written by Mr. Tyson’s wife, Kiki Tyson,

New York Times critic Michael Wilson wrote of the show that the “incongruous, almost childlike Tyson charm pokes through occasionally and makes you momentarily forget how ham-handed and manipulative the show is. Sure, we should save our accolades for the many people who have transcended difficult beginnings without abusing drugs, racking up a rape conviction and biting off a piece of another guy’s ear. But by the end of ‘Undisputed Truth’ you may at least be willing to grant that it would be swell if Mr. Tyson has finally found a nondestructive way to exist in the world.”