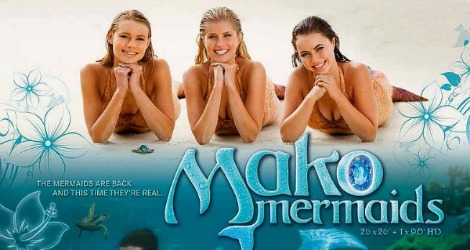 Netflix announced today that “Mako Mermaids,” a new adventure from the creators of the teen series “H2O – Just Add Water” is splashing down on July 26 exclusively on Netflix.

“We are thrilled to be the exclusive home of ‘Mako Mermaids’ in all Netflix territories,” said Netflix Chief Content Officer, Ted Sarandos. “‘H2O’ hit an amazing chord with teens around the world who love the clever mixture of action, comedy and romance that Jonathan Shiff and his talented team have created.”

“Netflix is the perfect home for ‘Mako Mermaids’,” said Shiff who produced the 26 episode series in association with Screen Australia, Network Ten, ZDF Enterprises and Screen Queensland. “Our fans love to watch the show how and when they want and they often return again and again to enjoy their favorite episodes.”

Following where “H2O – Just Add Water” left off, mischievous teen mermaids Lyla, Nixie and Sirena, guardians of Mako Island, fail to stop 16-year-old Zac from falling into the sacred Moon Pool and becoming a Merman. Risk being cast out forever, the mermaids must get legs, venture onto land and take back Zac’s new powers.

The first thirteen episodes of “Mako Mermaids” will launch in all Netflix territories on July 26 while the thrilling second half of the season will arrive in September.

I have to admit, I hadn’t heard of either series until the press release landed in my inbox this morning, but it sounds pretty fun. Maybe Mermaids are the new Vampires. Especially after those intriguing mermaid specials that ran on Animal Planet and Discovery.

Here’s the trailer for “Mako Mermaids” below. I don’t see a rating for the show, but the trailer looks like innocent fun.

Are you familiar with “H2O – Just Add Water” or “Mako Mermaids”? Any thoughts?