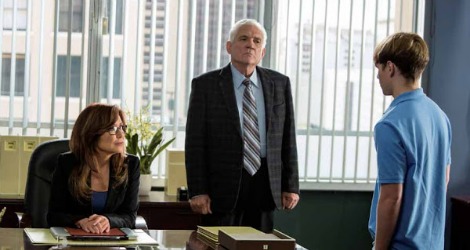 Any guesses on who sent Rusty that ominous letter? I don’t know the Rusty backstory —  other than what I learned last week — so feel free to leap in with ideas or to fill me in.

I’m glad Capt. Raydor is on his side, though, and that he didn’t fight her too much on having a police escort pick him up at school and bring him to the station. Someone in latex gloves writing a creepy letter is nothing to mess around with.

As for the case this week, the maid did it! Ok, no, that was way too easy, as was the abusive husband, since he seemed like the prime suspect after beating up his wife a couple of months earlier. And you go, Provenza! Love it when you throw a glass of water on irate people.

Note to all criminals who use an app: the cops will find you if you’re using it, well, apparently anywhere, really.

“You know, that’s not an exam you have to study for…” – Provenza to Flynn, who’s doing a “cleanse” before his annual physical

Note to Flynn: The big news this week is that three cups of coffee are good for you! Next week we can go back to coffee being bad for us. (And yeah, turns out there was caffeine in the cleanse drink anyway.)

I missed the thing about the discrepancy between the Facebook photos and the actual house. Anyone?

Note to DDA Rios: Don’t take Provenza’s word that the crime scene isn’t bad! Although for as cold as she is (“I can’t handicap my case worrying how it’ll affect a teenage prostitute”), it does my heart good to see her get queasy at a crime scene.

Rios sure wants to get Rusty out of Raydor’s house. Remember last week, she tried to get him relocated, too. But I love how smart Raydor is – she knew the letter sent to Rusty wasn’t overtly threatening enough to have him sent off to the foster care system.

Provenza’s Gilligan’s Island hat continues to crack me up.

Thoughts on this episode? Leave comments below.