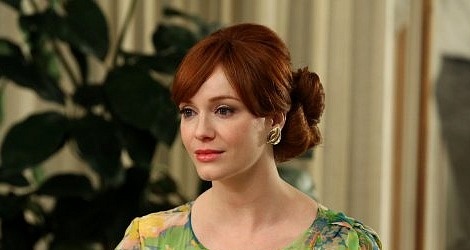 I had a new “Mad Men” viewing experience this past Sunday, on a large screen at the Tribeca Grand Hotel in New York. The hotel’s been holding weekly screenings in its 100-seat theater since season six premiered back in April, and will continue to do so until the season finale on June 23.

It was a treat to watch an episode in a theater setting with about 30 other “Mad Men” fans. (Attendance varies from week to week, so get there early, especially for the finale on June 23.) I finally got to see the ads everyone’s been tweeting about, including Christina Hendricks’ steamy Johnny Walker commercial.

The highlight, of course, was the episode itself. “A Tale of Two Cities” was an intense agency-focused swirl that unfolded as the 1968 Democratic Convention, with its riots and police brutality, aired on television. Three primary storylines explored the emerging dynamic of the (relatively) newly merged agency: Don, Roger and Harry go to L.A. to try to drum up some West Coast business. In their absence, Jim Cutler locks horns over politics as he attempts to discuss the Maneschewitz account. (In doing so, Jim delivers some kickass lines: “So I’m a fascist because I gave you a deadline?” and “I hate hypocrites, like hippies who cash checks from Dow Chemical and General Motors.”) Jim then pulls a few power plays, including contemplating firing Ginsburg and actually sending Bob Benson to the client meeting and not going himself. And Joan tests the account waters when what she thinks is a date turns out to be an exploratory business meeting from the head of marketing at Avon – a Fortune 500 company, no less – which her childhood friend joined.

This was a watershed episode for Joan. For the first time in the series, we see how removed she is from the client side of the business. She struggles to answers the Avon man’s questions, doesn’t bomb outright but isn’t as finessed as someone like Pete or Roger. When she returns to the office, she tells Peggy about the possible lead, Peggy tells Ted who summons Pete, who makes clear that Joan is not invited to the lunch. Joan, who understandably wants to prove to her colleagues, and perhaps also to herself, that she is indeed worthy of a partnership – given to her after her tryst with Herb in exchange for his support for the Jaguar account – stages a miniature coup and sets up a breakfast meeting with Peggy and the Avon exec, leaving Pete in the dust.

Back at the office, Pete is furious, and rightly so, and summons Ted Chaough, who orders Peggy to leave the room and asks Joan for an explanation. Peggy eavesdrops from her office, and when she hears Joan struggling to defend herself, sends Meredith to tell Joan there’s a call from Andy Hayes from Avon. Of course, there isn’t. Peggy’s created the ruse to spare Joan the interrogation. Peggy to the rescue!

Don and Roger fly out to L.A. together, where they ride in a Mustang convertible to the hotel with Harry, who is not preternaturally hip (to say the least) but who comes off as hipper than his older colleagues by virtue of his youth. The three don’t entice the Carnation Instant Breakfast execs. They go to a party in the Hills, where Roger is an absolute bully to his ex-wife Jane Seigel’s cousin Danny, making one jab about his shortness after another. (He showed his bully side once before, when for no reason he told Jane to shut up when she asked him where he was going so early in the morning.)

Danny, who now calls himself Daniel, kicks the usually likeable Roger in the nuts. Roger deserved it. Don smokes hashish, and in his trip, has visits from Megan, who doesn’t mind that Don’s kissing a woman, and the soldier he met at the bar in Hawaii, who’s been killed in Vietnam. Don somehow ends up in the pool, face down, evoking Hollywood Boulevard.

When the three return to the office from L.A., having struck out with three clients, the partners announce that they’ve decided on a name. Finally, the one that, as Jim puts it, offends the most people the least. The name: Sterling, Cooper & Partners. I have to say, I have found the delay and dysfunction around the firm’s new name to be ludicrous on practical terms, given that the advertising business turns on image. Whatever the writers’ intent, the fact that it took the firm months to decide on a name just seems off, almost silly.

All in all, a satisfying episode that discreetly pitted young against old, Jim against Ginsburg, Don and Megan’s different takes on the Chicago riots, the image of Harry with Don and Roger in the Mustang.

Ted, who’s been going to Detroit to work on the Chevy account, keeps referring to someone named “Jack.” I think that might be John DeLorean. It would be great fun if he figured in an episode or two, the way Conrad Hilton did.

Harry Hamlin’s been musing, most recently in New York Magazine, that he must have had halitosis when he tested for the part. (Peggy described him to Megan as Roger with bad breath.) I wish Matthew Weiner would comment one way or the other. Either way, it’s a fun read.

The “I Don’t Care About Don Draper Anymore” drum beat. Stop! You’re giving me a headache. Even if you don’t care, “Mad Men” is an ensemble, it’s not simply a character study built around Don Draper. Plus, if anything tragic happened to Don, I bet these folks who think they no longer care would be surprised at how much they do.

As for the Tribeca Grand screening, it’s free, there’s a bar but there’s no drink minimum — in other words, you can get out of there without spending a dime — and they serve complimentary light refreshments, including popcorn.