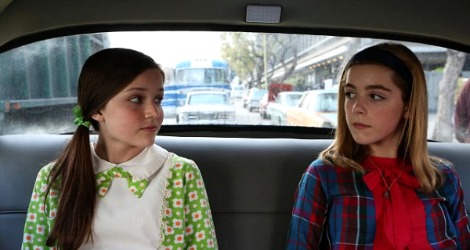 It’s ironic that this “Mad Men” recap is later than usual, because I ended up watching the show as it aired last Sunday, at Chief Ike’s, my neighborhood bar, and was planning to write the recap the next morning, after I’d re-watched the episode a second time. But when I went to pay my bill, Rob the bartender told me my card was declined. It turned out to be credit card fraud, and I wasn’t able to pay for my online episode on Amazon until Friday.

So, that’s why I just got to watching “Favors” for a second time. I cannot think of a television show or movie that’s made me this sad in a long, long while. I’m not just sad for Sally, for what she saw: her father, his pants down, atop Sylvia, her skirt up, on the maid’s bed, and what she lost.

I’m also sad for Betty. Whether Betty ever finds out what Sally saw, and I suspect she will, this absolutely is a mother’s nightmare, the ultimate unintended consequence, stemming from a decision that was aimed at protecting her child. Betty, concerned that Sally is one of two girls staying at a midtown hotel with a group of classmates in New York City for Model U.N., agrees to let Sally and her friend Julia stay at Don and Megan’s. This is what sets off the chain reaction that leads to Sally entering Sylvia’s apartment at the most inopportune moment, improbably with a full set of keys from the doorman. The more immediate catalyst is Sally’s friend Julia leaving a note for Mitchell, Sylvia and Arnold’s son, under their kitchen door, with Sally’s named to it.  When Julia tells Sally what she’s done, Sally goes back to the apartment to retrieve the letter.

As for Sally, what a twist. From the moment we learned at the top of the season that Don is sleeping with his neighbor, I assumed one of the spouses might catch them, even though that seemed obvious, or perhaps the college-age Mitchell, Don and Sylvia’s son, would. I never once thought it might be Sally. This development is particularly disturbing and layered because Dick Whitman saw his stepmother in a similar pose. How Don handles Sally’s upset, telling her at the bedroom door that it’s complicated, that he was, in a euphemism for the books, comforting Mrs. Rosen, is as unsettling as it gets. This is such a bottomless loss for Don.

Oh, and by the way, can they give Jon Hamm an Emmy?

What brings Don and Sylvia back together is Don tries to help Arnold and, though Don doesn’t speak directly to Sylvia, he gets Mitchell out of the draft. Mitchell, who’d spent time in France at the height of the 1968 protests, first confesses his plight to Megan. He’s at the top of the list, even if he goes back to the University of Michigan. Megan asks Don to help, but Don refuses. He says flat out it’s not their problem. Then Arnold, looking more serious than in episodes past, comes by the apartment, and he and Don go out for a drink. Arnold is devastated about the possibility of Mitchell going to war. He breaks down, off camera. This, and hearing how upset Sylvia is, inspires Don to get involved. He asks Pete if he still has a connection. Then Don tests the water at a dinner with GM execs, which infuriates Ted, who offers to help Don in exchange for Don pulling back on pursuing the Sunkist account since Ted is vying for the Ocean Spray account, and SP & P cannot have two juices. They shake hands.

Pete’s travails with his mother continue, as he discovers, through a conversation that Peggy has with his mother in the office, that her nurse Manolo is making her happy in ways she’s never been happy before. When Pete confronts his mother, at his apartment, and tells her she’s going to fire him, she tells Pete the most horrid things, that he was a sour child and now he’s sour man and he’s always been unlovable. No wonder Pete’s the mess that he is! In such moments, Pete’s mother makes Betty Draper look like a model mother.

There was a great scene with Ted, Peggy and Pete getting drunk at a restaurant after flying with Ted to Detroit. When Ted steps away to call his wife, leaving Pete and Peggy alone with their whiskey sours and sloppy smiles, they had the sweetest moment, with Pete telling Peggy that he can tell Peggy’s in love with Ted, after he mentions Ted’s wife not appreciating Ted’s flying, and that Ted is in love with her, too. Peggy tells Pete that nothing can happen. We shall see.

Then there’s Bob Benson. Before last week’s episode I cracked that my favorite “Mad Men” conspiracy theory was that Bob Benson was a closet interior decorator on a mission to redo Joan’s apartment. Ha ha, I know, but there were so many flying around about Bob Benson and Megan, too, I couldn’t resist. In “Favors,” we learn that Bob Benson is probably gay. After Pete tells Bob, who’d procured Manolo for Pete’s mother, that things are not working out with Manolo, Bob delivers a monologue about love being love no matter the sources, and presses his knee against Pete’s knee. For a brilliant, and I mean truly brilliant, analysis of Bob Benson, read Tom and Lorenzo’s piece on the subject.

Whatever else was going on in this episode, like Peggy calling Stan in the middle of the night, to help with a trapped rat, and even offering to make it worth his while, seems less compelling compared with what Sally and Don are going through. From the looks of “Next on Mad Men,” we’ll see more of how this unfolds.