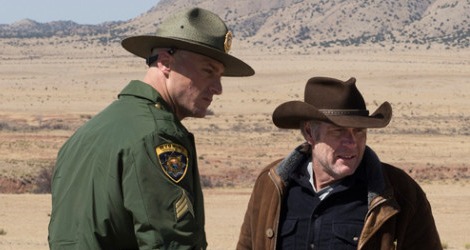 This week’s episode of “Longmire” involved murder, cattle thieves and flowers. After a cattle heist occurs out on the interstate, Sheriff Longmire and gang go on a search for the missing livestock as well as the driver, but that story plays second fiddle to Vic’s. Find out what happened to the cattle and the driver by watching the episode here.

Branch is in a constant state of annoyance as Walt gives him menial jobs to do, like dusting the semi rig for prints and questioning the various slaughterhouses in the county. He’s not happy about it, but he tries to keep his trap shut. He figures he’s going to be sheriff soon so he might as well save his energy. Vic gets a bunch of flowers, delivered by Bob Barnes – the perpetually drunk rodeo clown that shows up from time to time on the show. In his semi-inebriated state, he fails to deliver the card that went with the flowers, so Vic does her own Sherlocking. First, she calls her husband. From the get-go they seem to have a strained relationship, and he tells her he didn’t send the flowers because he knows from the last time he sent her flowers that she doesn’t like them. She corrects him by telling him she doesn’t like carnations, in particular, but she likes flowers in general.

Then she calls Omar, Longmire’s go-to munitions expert and big game hunter, who is sweet on Vic. He didn’t send her the flowers but he sure wishes he had. He shows up later in the episode with a bunch of tulips, but before he can give them to her, Longmire stops him.

Frustrated that she doesn’t know who sent the flowers, she practically beats the dickens out of Bob. Longmire pulls her off him and berates Bob and orders him to retrace his steps and find that card. Vic eventually gets the card and all it says on it is “Happy Anniversary.” Longmire comments that he thought her anniversary was in October and she comments, “It is.”

Back at home, Vic is visibly upset. When her husband asks her what’s going on, all she says is, “They’ve found me.”

The big question looms — who has found her? I had a sense she was hiding from something or someone back in season one. There was a hint of it last season when her husband said to her, “I think I’m just starting to get used to you as a blonde.” I’m guessing mafia ties? Doubtful she’s in witness protection. As a sheriff’s deputy, she wouldn’t stay in the police force, regardless of state, if she was in the witness protection program, right?

I hope we get to see some flashbacks of Vic’s past with her as a brunette.

Looks like Lizzie is back next week, and she’s pulling out her sexiest lingerie to seduce the sheriff. Will he take the bait or push her away? Also, Cady returns home (hopefully not at the same time Lizzie is trying to seduce Walt!)