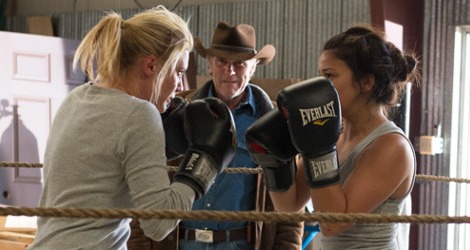 This week’s “Longmire” finds the sheriff up to his eyeballs in candles, Ranier beer and hot water! Of course, the mystery of the week plays second fiddle to the character development of the crew at the sheriff’s office.

Lizzie is back! This woman just won’t give up. While Walt hasn’t actually turned her down, he is hesitant to do anything more than kiss and make nice with Lizzie. At this rate, we’ll all be members of the AARP before these two get down and dirty. I wonder how long Lizzie is going to keep pursuing Walt before she finally gives up and moves on to greener pastures. Ruby calls him with a possible home invasion. Walt recognizes the address and races over to Lizzie’s to find her door slightly ajar. As he enters, he sees a fire glowing on the hearth, two ice cold cans of Ranier beer, and Lizzie in a negligee and gartered stockings straight out of the Victoria’s Secret catalogue.  Before things can progress beyond an initial kiss, Walt gets a call from Ruby and seemingly gleefully makes his exit, though he later admits to her it’s the “best home invasion call I’ve ever gone on.”

Later in the episode, Walt finds himself in hot water when Lizzie grills him on why he hasn’t told Cady about them after she introduces herself to Cady on the streets of Durant when she recognizes her from a picture on Walt’s desk. Walt is surprised to hear that Cady is back in town and extricates himself from a potentially messy situation with Lizzie by telling her that he’s going to go see Cady right now and tell her all about them.

Branch stupidly asks Vic over the phone about Walt’s state of mind over the town hall debate next week. He doesn’t realize Vic has him on speakerphone and Walt is sitting next to her. He quickly recovers when Walt answers the question himself and mentally kicks himself in the rear for assuming Vic is alone. When is she ever alone? It seems like she’s always with Walt or at the office with the rest of the gang.

This week’s mystery involves female MMA fighting and prescription drugs. Their latest victim, Tanya Dove, is found in an alleyway, and it looks like she’s been shot dead. As there is no blood where she is found, it appears that she was killed elsewhere and her body dumped in the current location. She is found with a partial pill, a cellphone, and a key.

Their investigation takes them to a local bar where Tanya’s sister is fighting in the ring. Walt is surprised to find Henry there enjoying the fight, but he’s even more surprised when he sees that Henry is there with Deena, Henry’s on-again, off-again flame.

Lorna, Tanya’s sister, flees before they can question her, so Walt and Vic question Tanya’s boyfriend. He is with his mom. (Flashback alert! It’s Andrea Zuckerman from the original “Beverly Hills, 90210”! Gabrielle Carteris, now (gasp!) 53, guest stars on this episode.) Walt notices that the son is stoned and the mom is clearly unaware of it.

The pill takes them to the local pharmacy and later to a drug den of teenage dealers who think they’re better than the sheriff. Turns out they break into homes of the elderly and steal their prescription drugs. Of course, the team finds the killer, but is it who you thought it would be? Episode ends with Walt returning home to find Cady waiting for him.  Their relationship is fragile right now, so Walt takes baby steps with her. Though it looks like they are both keen to rebuild what they once had.

Would love to see a Ferg-centric episode this season. The Ferg has been relegated to an even more minor role than last year it seems. I would also love to see Doc Bloomfield — he’s become one of those never-seen characters like Maris, Niles’ wife on “Frasier,” or Charlie from “Charlie’s Angels.” Who would you cast as Doc Bloomfield? I’m thinking someone who epitomizes the West visually, perhaps someone like Sam Elliott and his crazy mustache.

I’m dying to know what happened in Vic’s life in Philadelphia and why she’s now in hiding in Wyoming. Watch the video below to see what the actors on “Longmire” think of Vic’s past.