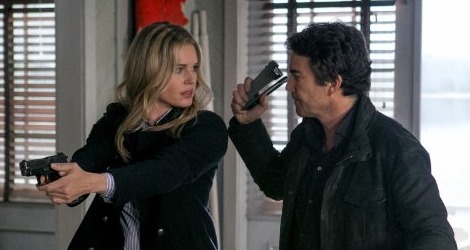 Still loving “King & Maxwell” two episodes in. For a lot of reasons, but especially the fun banter and the fact that Sean thinks a stapler would make a good weapon (see above).

But also because Michelle gets to whoop ass while Sean jumps in when needed, as was the case at the end of this ep, where Alina came after the Russian mobster. Didn’t see that coming, but it makes perfect sense after what he did to her.

Love how the episode opened. King & Maxwell do a good deed and help a wife get away from her crazy husband. Loved it when the guy goes nuts seeing his sports car in the swamp, then we see the wife in the back of King & Maxwell’s car, and then the icing on the cake when Sean tosses the guy’s car keys into the mud, never to be found again, as they drive away. Clearly, you want these guys on your side.

I’m so glad to see Edgar working in the office. He’ll offer a nice buffer for the two, and interesting storylines, I’m sure. And kudos to Ryan Hurst for playing a character very different from Opie on “Sons of Anarchy.”

And Edgar tracking down a cell phone call made from INSIDE the FBI building? That’s for all the folks who don’t like the feds checking up on us. Take that.

I predicted that King & Maxwell’s Secret Service backgrounds would be good fodder for storylines, and that’s already the case. Can’t wait for next week.

“A good outcome is its own reward.” – Sean

“We need a better class of clientele.” – Michelle
“Then we’re gonna have to leave Washington.” – Sean

“You need a new security system … and pencils.” – Edgar, after breaking into their office and setting up shop

“You do remember we’re not IN the secret service, right?” – Sean

“He did that slimy smile he does when he knows something you don’t.” – Sean, commenting on Rigby’s smugness

Your thoughts on this episode? Leave comments below.