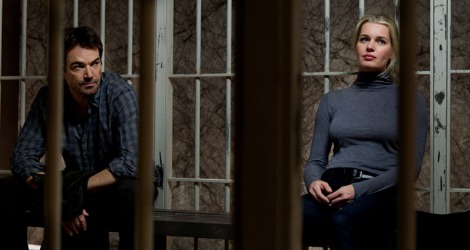 And it looks like a fun one, too. With this show and “Major Crimes” and the other crime dramas on its summer slate, TNT is determined to turn me into a crime drama fan. I am yours for the taking, TNT.

I love a show with handsome male and female leads and lots of fun banter. And yet, “King & Maxwell” is also poignant, as we learn when King’s old buddy ends up in the morgue. The fact that both he and Maxwell have iffy histories as Secret Service agents just adds to the fun. And I’m guessing they have some great contacts to call upon.

Also love the gender-bending in this show. King is more of a word guy, while Maxwell gets to do all the kick-ass stunts, starting with chasing that bus driven by a guy in a beaver suit in the first scene (backed by one of my favorite action-soundtracks – The Heavy’s “How Ya Like Me Now?”). And the bus even flips on its side — nice big-budget stunt, TNT!

I’ve always had a big girl-crush on Rebecca Romijn, and now I have an even bigger crush (and let’s not forget that she’s 40 and doing all those stunts – you go!). And the fact that she rows to work and then showers with the door open? That’s enough to throw King off his game. Clearly, there’s already some romantic tension going on here. It’s just a matter of time.

Ripped from the headlines satellite surveillance storyline and this quote: “Hope you’ve got a warrant if you’re diggin’ around my  phone records.” – King to the FBI guys

Michael O’Keefe! Although I hope they give him a heart, because right now, he’s kind of a cliche FBI hard-ass.

Does anyone remember the ABC show “Thieves,” starring John Stamos and Melissa George as professional criminals? It ran for one season in 2001. I’ve been missing it ever since, and “King & Maxwell” reminds me a little of that show, which makes me happy.

Ryan Hurst’s Edgar Roy savant character is a long ways from Opie on “Sons of Anarchy.” Sounds like he’ll be helping out with the bookkeeping. Sweet.

I’m never good at guessing whodunnit in these shows, and I didn’t guess this one either. Did you know who the killer was early on?

I really want to read the “King & Maxwell” books by David Baldacci now. Are you a fan?

Your thoughts on “King & Maxwell”? Leave comments below!