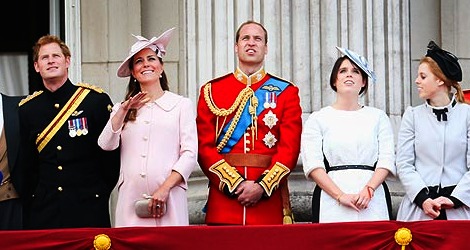 Like everything she’s done since becoming part of the royal family, Kate Middleton, a.k.a. the Duchess of Cambridge, celebrated Queen Elizabeth’s birthday with style and grace last week in London.

The 31-year-old expectant royal rode an open-topped carriage and later joined three generations of the royal family on the balcony at Buckingham Palace. On Kate’s last official engagement before she heads off to prepare for life as a royal mum, she paired a pale pink coat from Alexander McQueen with an older, favorite headpiece – a Jane Corbett hat trimmed with lace that she’d worn at a palace garden party last year.

Kate smiled and waved at the crowds as the carriage she shared with brother-in-law Prince Harry tooled along the Mall to Horseguards Parade where the marching and drills took place.

Her husband Prince William, dashing as always, wore his ceremonial Colonel of the Irish Guards uniform as he rode alongside his father Prince Charles just behind the Queen, who was in the Glass Coach alongside her cousin, the Duke of Kent. The Queen’s husband, Prince Philip, 92, was in hospital recovering from abdominal surgery.

After an appearance on the balcony, the family, cheered by thousands in the Mall below, headed back inside, and Kate waved a final farewell as her last appearance before becoming a royal mum.

So sweet… I just love her.