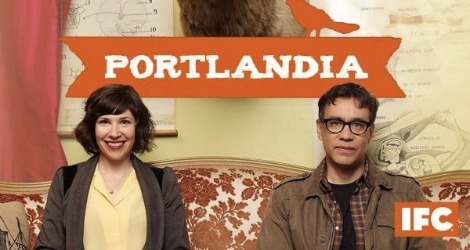 Last night, inspired by a friend who recently moved to Portland, Oregon, I watched the first episode of “Portlandia.” This show is super fun.

I’m watching it on Netflix (the first two seasons are available there), but you might find it on the IFC network (new episodes coming in 2014) or On Demand, or you can also download it from Amazon, iTunes, xBox. More on where to watch it here.

The show both celebrates and makes fun of the whole Portland vibe – or as they say in the first episode, “the place where young people go to retire.” That place where things like naked bike-riding happen, where bohemians still exist, where the 90s flourish, and where free range chickens are a religion.

It stars Fred Armisen (“Saturday Night Live”) and Carrie Brownstein doing sketch-like vignettes in various locales throughout the city of Portland (where it’s actually filmed), along with a slew of notable guest stars.

In the first episode, Fred and Carrie play a couple who go into a restaurant and ask the waitress about the chicken on the menu. Is it free range chicken? Did it have a name? How many acres did it range on? The waitress promptly produces a file with paperwork on the chicken, but that’s not enough for the couple. They want to know WHERE this chicken was raised.

So they journey to the farm just outside of Portland, where they find a seductive cult leader named Aliki (Jason Sudeikis), surrounded by his many wives. The couple fall under his spell and spends the next few years on the farm until he dies, at which time they return to the restaurant, where the waitress has been holding their table for them.

Meanwhile, at a bookstore run by two bohemians (again, Carrie and Fred), a man (Steve Buscemi) runs inside to use the toilet, and the owners demand that he buy something. He ends up getting locked in the bookstore when they close up for the day. It’s his worst nightmare.

In addition to the wondrous writing and characters, what I love about “Portlandia” is that each episode is only 30 minutes long. By the time I hit the hay, which is usually somewhere between 2 a.m. and 4 a.m., I like to watch something just for fun, but can usually only prop my eyes open for 20 or 30 minutes. Meaning I miss the last half of every hour-long show I try to watch. “Portlandia” solves that problem.

Shot entirely on location in Portland, Oregon, “Portlandia” is co-created and co-written by Fred Armisen, Carrie Brownstein and Jonathan Krisel, who is also the series director. It’s executive produced by Lorne Michaels and produced by Broadway Video.

Check it out and report back. I think you’ll like it.