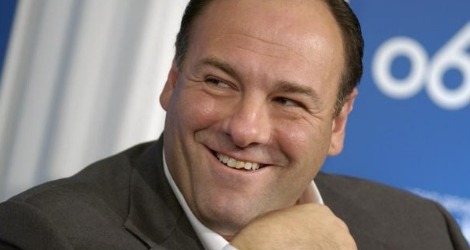 This morning, friends and fans of  “The Sopranos” star James Gandolfini packed New York’s Cathedral of Saint John the Divine, the majestic and massive Gothic Revival church on 111th Street and Amsterdam Avenue — around the corner from where I live — for the funeral of the New Jersey born actor, who died last week in Italy at age 51.

Before 9 a.m., it was a chaotic scene outside the cathedral where fans started lining up early for the funeral, which was open to the public.

All trashcans around a four-block radius of the cathedral were removed. An officer told me it was a preventive measure to deter terrorists from planting bombs.

By 10 a.m. as mourners were piled inside the cathedral, the streets outside were eerily quiet and hushed as only television camera crews and gawkers remained outside behind barricades.

“R.I.P. James Gandolfini” read the blackboard outside of the Greek bakery Artoplis on 113th Street and Amsterdam, where the daily menu is usually printed.

David Chase, director and creator of “The Sopranos,” read a letter to the late Jersey Guy as his eulogy according to the New York Daily News. Chase recalled that the bear-like man never lost touch with his inner-child. “That’s why I think you were such a great actor, because of that boy inside,” Chase said inside the Cathedral Church of St. John the Divine.

This made me recall the last time I saw Gandolfini, at a press conference last December for the music drama “Not Fade Away,” which reteamed director Chase with his “Sopranos” star. As usual, Gandolfini was quiet, and he let his co-stars do all the talking.

The film is about a group of cocky young kids in 60’s Jersey who try to form a rock band. Gandolfini plays Pat, the strict and disapproving father of the band’s lead singer John, (played by John Magaro). As a blue-collar worker, Pat is frustrated and confused by his son’s rock-star fantasies. He wants his son to go to college and have the education and opportunities he didn’t have. Gandolfini is so good and totally believable, you can feel the pain, confusion and disapproval eating away at his character in every scene as he fears for his son’s precarious future in music.

Gandolfini, who was brought up in New Jersey, was asked about how he found his character. “You’re playing the father, expressing a lot of frustration and disapproval,” the moderator said. “You’re the guy potentially living the story that John’s character is going through. How did you put yourself into the position of sort of overseeing this character’s changes and being confused and frustrated by them when probably it was very different from you.”

Gandolfini, who was uncomfortable talking about himself, cracked a few jokes and then said quietly, “I especially based this on David’s writing, of course, and a lot on my father. We didn’t have this kind of relationship necessarily, but there were a lot of similarities. Basically, it’s a little bit of an ode to my father and me being a pain in the ass son and now I’m realizing it. But I realized it before he died so that was good, so I got to apologize.”