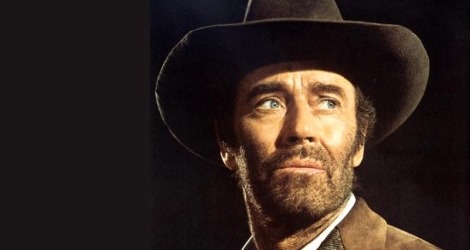 Henry Fonda was a man’s man who appealed to women, as well. When Hollywood needed to portray a man who was honest, slightly innocent but not to be duped, tough when he needed to be but ever compassionate, Fonda was the man.  Integrity was his middle name.

.” The 10-DVD set includes ten Fonda films selected from the more than 80 films he made during a 50-year career in Hollywood.

This new collection features Fonda’s serious films — manly westerns and war movies, for the most part, and skips the romantic comedies he made during his career. Fonda also starred in the historic drama, “Drums Along the Mohawk” (1939) and  plays Wyatt Earp in the western, “My Darling Clementine” (1946).

The surprise picks in this collection are “Immortal Sergeant” (1943), a war movie played out in the north African desert, “Daisy Kenyon” (1947), a noir-ish romantic triangle, and “The Boston Strangler” (1968). The first two are largely forgotten films, and in the third, he is totally upstaged.

According to one source, Fonda hated “Immortal Sergeant” and only made it to assure he could do “The Ox-Bow Incident.” In “Immortal Sergeant,” as he struggles in the desert, his flashbacks show us his girl, Maureen O’Hara, who is being wooed by a mutual acquaintance. Fonda plays a wishy-washy individual who predictably finds strength when he needs it among the tribulations of war. He wins the girl in the end. “Daisy Kenyon,” another forgotten film, was made in 1947 and was Fonda’s last film under contract to Fox. Joan Crawford carries on a love affair with a married man, Dana Andrews, but Henry Fonda tries to win her heart.

Despite the stellar trio of stars, the movie has pretty well sunk from view. After this movie, Fonda was away from movies for a while, acting on Broadway, and returning from time to time to make stage versions of his movies. In the latter part of his career, Fonda’s stage work was more impressive than his movies, where he acted in a long line of disaster movies or movies that throw every star ever born into the line-up.

I include in that description “The Longest Day” (1962), in which he plays a relatively small part. However, in 1968, he came back to play the lead investigator in “The Boston Strangler.”

Fonda is perfect as the bookish, reluctant crime fighter who slowly begins to enjoy his role. However, he is totally eclipsed by a fantastic performance by Tony Curtis, who amazingly was not even nominated for an Academy Award.

What better gift for Dad on Father’s Day than a bouquet of All-American Hero films featuring Henry Fonda? (You don’t need to tell Dad that Mom and the girls are going to enjoy them, too.)