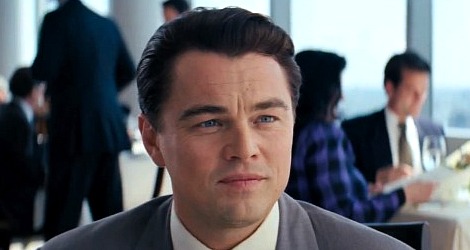 The trailer for “The Wolf of Wall Street” hit the web today, and it’s got all my favorite stuff in it: Leonardo DiCaprio as a crazy-rich guy who dances, Matthew McConaughey as a crazy … well, just a crazy guy, which suits him perfectly, and the brains of Martin Scorsese to bring it all together.

Based on the memoir by Jordan Belfort

, DiCaprio stars as a Long Island penny stockbroker who served 20 months in prison for refusing to cooperate in a massive 1990s securities fraud case involving widespread corruption on Wall Street and in the corporate banking world, including mob infiltration.

By the way, the film — the fifth collaboration between DiCaprio and Scorsese — was shot digitally instead of on film. Scorsese, a big proponent of shooting on film, shot “Hugo” digitally because it was being filmed in 3D.

“It would appear that we’ve lost the battle,” said his longtime editor Thelma Schoonmaker. “I think Marty just feels it’s unfortunately over, and there’s been no bigger champion of film than him.”