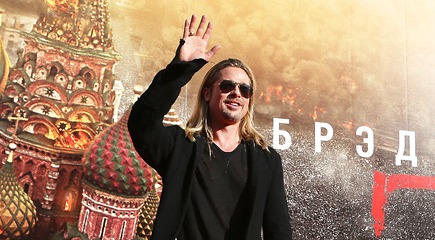 I can’t tell if Brad Pitt is wearing leather pants or maybe some sort of vinyl … either way, he looks dashing as ever at the premiere of his zombie movie “World War Z,” at yesterday’s opening ceremony of the Moscow International Film Festival.

Here he is in London, Paris and Berlin. Angelina Jolie was by his side for those premieres.

He looks amazingly rested for being in the middle of a massive press tour, in which he’s flying around the globe promoting the film, which opens in American theaters today.