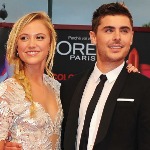 I was chatting last night with Melanie Votaw about the fluffy gown worn by Maika Monroe at the Venice Film Festival. Last night I said it was a little too feathery frou-frou for me, and it made me want to go out for a caramel latte with whipped cream. I like the dress better today. It must be tough for celebrities to choose fashions that are both gorgeous and make a statement, and I’ve decided this dress from the Marchesa Fall 2012 collection does just that. Maika is only 18 years old, and the feather-like embroidery and flared tulle skirt is a fun way for her to shine with a youthful vibe.

Monroe and Zac Efron (@zacefron on Twitter) hit the red carpet for the premiere of their new film, At Any Price, a drama centered on an enterprising farmer whose plans cause problems within his family. It’s not scheduled for a U.S. release date yet.

Efron will travel next to Canada, where his Lee Daniels-directed drama, The Paperboy, is screening at the Toronto International Film Festival prior to its Oct. 5, 2012 release. Next up: the romantic comedy Are We Officially Dating?, starting production in NYC this fall.

Thoughts on the dress? Too fluffy, or are you ok with it?