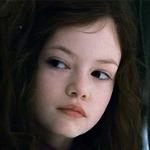 MTV sure knows how to get viewers. I’m betting that many people tuned into last night’s MTV Video Music Awards mainly to see the new trailer for The Twilight Saga: Breaking Dawn, Part 2.

No Kristen Stewart, though. I have no idea if she’s working on-set elsewhere or if the exclusion is because of her much-publicized affair with Snow White and the Huntsman director Rupert Sanders. It seems pretty clear that she and Pattinson will be thrown together during press junkets for Breaking Dawn, Part 2, so I guess they’ll have to figure it out.

One thing’s for sure, though. The 90-second clip that played at the Video Music Awards is way more action-oriented than any of the previous films, shining a spotlight on Bella’s newborn vampire skills and teasing us with the climactic battle scene. Let’s take a look at five new things in this trailer we haven’t seen before.

1. Renesmee’s Sweet Face. We really haven’t had a good view of the little one’s face until now, which is interesting since her half-vampire half-human immortality is the focal point of the whole film. But here, Bella and Edward’s daughter finally reveals herself. I predict big things for Mackenzie Foy‘s career.

2. Bella and the Mountain Lion. Wow, that girl is FAST since being turned. Here she’s racing through the forest, leaping from cliffs, flying through the air, and tackling a mountain lion with finesse! The once-clumsy teen has officially arrived.

3. Edward’s Icy Power. We know there’s an epic battle, and we get a better view of it in this trailer. The Cullen and Volturi clans storm towards each other and, in one awesome effects sequence, Edward jump-smashes a patch of ice, sending Volturi into the inky depths below.

4. Vampire Tag-Teams. My favorite scene is near the end, where Edward lifts Bella and spins her around so she can kick several of the evil Volturi. The Undertaker and Kane got nothin’ on these two.

5. Dakota Fanning’s Eyes. While we still don’t get a great view of Volturi clan members Jamie Campbell Bower, Cameron Bright, Charlie Bewley and Daniel Cudmore, we get up close and personal with Jane (Dakota Fanning) and those cat eyes. Don’t mess with her — or her pain-inflicting vamp powers.

What other new things do you see in the trailer. Tell us in the comments!