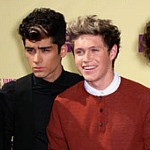 One of the big winners of the 2012 MTV Video Music Awards tonight was One Direction, the boy band that’s been wowing us — ok, mostly teens and tweens — with their talented adorableness. Formed in London in 2010, the British-Irish band includes Niall Horan, Zayn Malik, Liam Payne, Harry Styles and Louis Tomlinson.

The boys took home three awards at the VMAs, including Best Pop Video. Here they are. Cute, aren’t they?