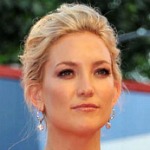 I’m not always gung-ho about the peachy tones, maybe because the color simply looks better on some women than others (it turns me into a ghost). But wow, Kate Hudson’s champagne-colored gown from Atelier Versace is a knock-out! She’s a goddess, plain and simple.

The actress wore the dress, accessorized with an Edie Parker clutch and Versace heels, to the Venice International Film Festival premiere of The Reluctant Fundamentalist this week.

Directed by Mira Nair (love her work!), the film follows a young Pakistani man chasing corporate success on Wall Street who finds himself embroiled in a conflict between his American Dream, a hostage crisis, and the enduring call of his family’s homeland. I don’t see a U.S. release date yet, but I’ll keep you posted because it looks like a great film. Also stars Kiefer Sutherland and Liev Schreiber.

What do you think of the dress? One thing’s for sure – you’d better not miss too many yoga workouts if you’re going to be donning this number (and clearly, Kate didn’t)!