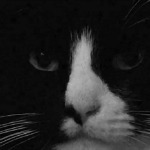 I hope you don’t have anything planned for the rest of the day, because what I’m about to tell you could divert your attention indefinitely. The first ever Cat Video Film Festival was held on Aug. 30, 2012 at the Walker Art Center in Minneapolis, and 10,000 people showed up.

Yes, that’s right. While viral cat videos are generally viewed alone at home on your computer, someone got the idea to create a whole epic event out of the idea. Look, I love cats, so if I was within driving distance of Minneapolis, I could see myself going. I’ve been to the Walker Art Center when my sister was at the University of Minnesota in the 1970s, and I generally think of the place as a deep well of culture, which makes holding a cat video film festival there that much more appealing.

In fact, the festival started out as a joke, says organizer Katie Czarniecki Hill, 28, a program associate at the Walker Art Center. “It is an experiment,” she told the Los Angeles Times. “It will be interesting to see if people think it is silly or great or a waste of time. But I like the idea of everyone admitting they like cat videos.”

According to The New York Times, more than 10,000 feline aficionados came out for the event, which — of course — went viral when  organizers asked people to submit videos online.

“A lot of people have cats, but I don’t think they talk about it as much — it’s not as visible as the dogs are,” says Vicki Lowell, senior vice president for marketing and operations at Animal Planet, which approached the Walker Art Center to become a sponsor.

So who’s the big winner of The Golden Kitty? Henri 2, Paw de Deux, created by William Brandon. “This is a great honor,” he said while accepting the award. “I don’t think I’ve ever purred this loudly!”

Hill and a hand-selected jury of colleagues winnowed 10,000 entries down to 79 videos, all of which were shown Thursday during the 75-minute festival on the lawn. Animal Planet will broadcast the award-winning video during the season finale of My Cat From Hell on Sept. 8, 8 p.m. ET.

And for the record, here’s the winner of The Golden Kitty. Think it deserves the big award? I think it’s very well done. I especially like the music and editing. Very powerful.