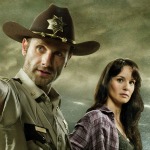 I must admit, I sort of gave up on watching The Walking Dead, the AMC show based on a comic book series written by Robert Kirkman  (Collider has a nice little video interview with him) and published by Image Comics. The show follows a group of survivors led by Rick Grimes (Andrew Lincoln) following a zombie apocalypse.

I got through season one ok, but felt like there was this blanket of doom over me every time I got done watching an episode. Even though it’s a brilliant show with great characters, stellar acting, beautiful music and awesome special effects, maybe I’m just not cut out for apocalyptic shows filled with blood, guts and zombies. It’s tough enough out here even without the zombies.

That said, I might consider checking out the The Walking Dead Social Game, a Facebook game based on the show. You get to step into the zombie-filled world, fight for survival, help your friends survive, and interact with characters and settings from the show — all while dealing with people-eating zombies, of course.

Plus, since it’s on Facebook, there’s no special gaming system you have to buy in order to play it, which is cool.  Season three of The Walking Dead premieres Sunday, Oct. 14, 2012 at 9 pm ET/PT on AMC.

Are you a fan of The Walking Dead? And if so, what is it you love about the show? What can you say that would convince me to watch it again?