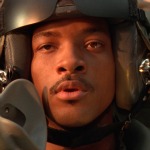 Happy Independence Day! Hope you’re outside barbecuing something tasty, lighting a few sparklers, and thinking about what makes our country awesome.

When you come inside later, plop down on the couch (another great American tradition) and watch a great patriotic movie or two. I’m sure some of these will be playing somewhere on your TV.

What could be better than watching Will Smith fight aliens and save the world? It gets top billing here because of Bill Pullman’s over-the-top patriotic speech as President Whitmore (“Today … we celebrate … our independence day!”), but it’s also a really fun movie with great special effects. Roland Emmerich directs, with an all-star cast that includes Jeff Goldblum, Mary McDonnell, Judd Hirsch, and Randy Quaid. Rated PG-13 for sci-fi destruction and violence.

This movie starring Nicolas Cage (can’t help it – I love his cheesiness) as a guy intent on stealing the Declaration of Independence gets panned a lot. But you know what? It’s a fun adventure flick, and you might learn something about our heritage in the process. Directed by Jon Turteltaub, it also stars Diane Kruger, Justin Bartha, Harvey Keitel and Jon Voight. Rated PG for action violence and some scary images.

I LOVE this movie! Every time I come across it on TV, I can’t help but watch. Especially love the scene towards the end where communication is cut off between Houston and the astronauts. Tense! Plus, it’s just a great drama based on the real-life story of the Apollo 13 space mission (“Houston, we have a problem”), and it’s all about being brave and honorable when all seems lost. Directed by Ron Howard and based on the book Lost Moon by Jim Lovell, it stars Tom Hanks, Bill Paxton, Gary Sinise, Kevin Bacon and Ed Harris. Rated PG for language and emotional intensity.

Before he went a little crazy, Mel Gibson starred in this movie as a peace-loving ex-soldier who gets pulled into the American Revolution after his son is killed by a Redcoat. Warning: you might weep a little seeing Heath Ledger on screen. Roland Emmerich directs, with Chris Cooper, Jason Isaacs and Tom Wilkinson in starring roles. Rated R for strong war violence.

This straightforward World War II biopic stars George C. Scott as General George Patton. The role won him an Oscar, but he refused, claiming that competition between actors was unfair and a “meat parade”! The 1970 film was written by Francis Ford Coppola, directed by Franklin Schaffner, and produced by Frank McCarthy, a retired brigadier general who served on the staff of Gen. George C. Marshall during World War II. It took him 20 years to get this film made. The movie also opens with one of the most patriotic scenes in American cinema: General Patton standing in front of a giant American flag giving a spirited pep talk to his soldiers. Rated PG.

The African American pilots in the Tuskegee training program fought two wars during World War II — the enemy AND the racism in their own country. Directed by Anthony Hemingway and produced by George Lucas, this movie features great special effects, a worthy cast that includes Terrence Howard and Cuba Gooding, Jr., and a piece of our history everyone should know about. Rated PG-13 for some sequences of war violence.

Sean Connery, Alec Baldwin, James Earl Jones and Sam Neill starred in this well-crafted political thriller about a reputed Soviet submarine captain who plays a cat-and-mouse game with the Americans during the Cold War. Piloting a submarine with a revolutionary new propulsion system, Marko Ramius (Connery) plays an ingenious game of strategy with the CIA. Directed by John McTiernan and adapted from the book by Tom Clancy, this 1990 flick is must-see material. Rated PG.

I can’t watch this movie because it’s just too darn sad. But my husband loves it. Steven Spielberg directs this touching story about an U.S. Army Chief of Staff who sends a group of American soldiers to the most dangerous war-torn territories to save Private Ryan, the last remaining son of a grieving mother (told you it was sad). It really is one of the best World War II films out there, if you can get past the sadness. Stars include Tom Hanks, Tom Sizemore, Vin Diesel, and Edward Burns. Rated R for intense prolonged realistically graphic sequences of war violence, and for language.

This Don Bluth-directed animated classic is fun for the whole family. It’s all about a Russian mouse family — the Mousekewitz clan — who dream of immigrating to America, a land they believe is without cats. While we all know that’s not the case, it still offers them the chance for a new life of freedom. Nice to revisit a movie where U.S. Immigration isn’t a bad word! Steven Spielberg is the executive producer. Rated G.

Can’t have a list of patriotic movies without including something about baseball. Kevin Costner stars in this sweet drama about an Iowa farmer who receives a message to build a baseball diamond in his corn field. He’s told: “If you build it, he will come.” Sure, it’s about baseball, but also the unwavering American ingenuity that builds cities, technology and other useful things.

As Terence Mann says in the movie, “This field, this game … it’s a part of our past, Ray. It reminds us of all that once was good.” Directed by Phil Alden Robinson and adapted from the book about Shoeless Joe Jackson  by W.P. Kinsella, it also stars Amy Madigan, James Earl Jones, Ray Liotta, and Gaby Hoffman. Rated PG.