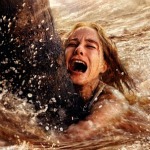 I’ve gotten to the point where every time there’s a natural disaster, I start predicting when the movie will come out. It was 2004 when that awful tsunami devastated Thailand, which means it’s been eight years since it happened. And yet, it still seems too soon to be making a movie about it. Too many people lost their lives.

The Impossible stars Naomi Watts and Ewan McGregor as a couple vacationing with their two kids in Thailand when the tsunami sweeps the region, leaving hundreds of thousands dead in 14 countries. Directed by Juan Antonio Bayona, the disaster drama is based on one family’s experience and uses super-realistic CG to re-create the tragedy as it happened.

Based on the new Spanish teaser posters, it looks pretty intense. Not only that, it’s rated PG-13 for intense realistic disaster sequences, including disturbing injury images and brief nudity. That sounds like an R movie to me. No U.S. release date has been announced, but it premieres in Spain on Oct. 11, 2012. A previously released Spanish-language trailer depicts Watts and McGregor during a happy family vacation when the tidal wave rips through their seaside resort, hurling Watts through the glass window of a botanical garden-type structure. It reminds me of Clint Eastwood’s Hereafter, about which I had similar misgivings when it was released in 2010.

Is it too soon for The Impossible? Should there be a ban on movies based on real-life natural disasters? I’m guessing that would never happen, since so many are made and reap good profits at the box office. Check out the Spanish trailer, if you dare…