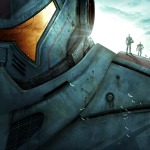 I haven’t heard much about Pacific Rim, and that’s because Warner Bros. has released very little on the aliens vs. robots flick, in theaters July 12, 2013.

To give us a little taste of what’s to come, they’ve released a poster pegged to Comic-Con 2012, and word has it that director Guillermo del Toro will give attendees a glimpse of the movie, as well.

Based on a screenplay by Travis Beacham (he wrote Clash of the Titans; not sure that’s a good thing), Pacific Rim is set in a future where a dimensional rift has opened up in the middle of the Pacific Ocean, resulting in all kinds of otherworldly beasts, a.k.a. Kaiju, leaking through. To protect the planet, the world’s nations authorize the construction of giant robots, a.k.a. Jaegers, to fight them off.

The cast includes Idris Elba, Charlie Hunnam, Ron Perlman, Clifton Collins, Jr., and Charlie Day. Tom Cruise was considered for a role at one point. It’s anybody’s guess whether the publicity surrounding him these days is good or bad for movie marketing.

What do you think of the poster? Seems like the movie is ripe for great special effects.