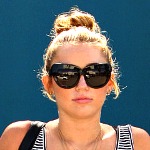 Miley Cyrus is sporting some new body art — a quote from President Theodore Roosevelt, which she showed off in this photo of her leaving her pilates class in West Hollywood. Cute top, Miley. I want those abs! (Um, maybe get yourself to a pilates class, Jane.)

I wouldn’t necessarily connect Miley Cyrus with President Roosevelt, but the quote on her arm is his: “So that his place shall never be with those cold and timid souls who knew neither victory nor defeat.” It’s from the President’s speech he made at the Sorbonne, Paris, on April 23, 1910.

It’s not Miley’s first tattoo. She also has “love” on her ear in honor of a close friend who died of cystic fibrosis, and a small equal sign on the inside of her right ring finger to show her support of same sex marriage. The significance of the tattoos diminishes the pain of getting them, she says.

“It really doesn’t hurt if you’re thinking about the meaning,” she once said. “I could never get a meaningless tattoo, but I think that if you’re doing something that’s important, that’s significant in your life, it takes some of the pain away.”