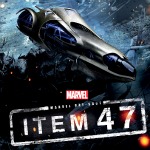 Here’s another one, not for a feature film, but a short film called Item 47, based on The Avengers. We’re looking down a Manhattan corridor towards Stark Tower, and you might remember this scene from The Avengers poster. Iron Man, Nick Fury, Thor, Captain America, Black Widow, Hawkeye, and the Hulk were busy defending this street from a gang of alien thugs. Directed by Marvel co-president Louis D’Esposito, the premise of Item 47 is this: a young couple (Lizzy Caplan and Jesse Bradford) recover one of the lost alien weapons and turn it into a life of crime. S.H.I.E.L.D. agents played by Titus Welliver and Maximiliano Hernández (reprising his role as Sitwell from Thor and The Avengers) are assigned the task of stopping them and getting the weapon back.

If you’re at Comic-Con in San Diego, Marvel is giving out the poster at a secret screening of Item 47 on Friday night. To figure out where it is, start by downloading the free Avengers Second Screen app from the iTunes store, which offers clues leading to a hunt Friday morning through San Diego. If you follow the trail right, it’ll lead to the secret screening. Yay, a scavenger hunt!

Item 47 will also be available on The Avengers DVD in September.