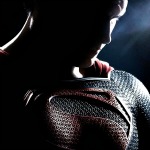 The teaser trailer — make that trailers — were released for Man of Steel, Zack Snyder’s reboot of the tale of Superman, with Henry Cavill in the starring role. After hearing all the buzz about the trailer at Comic-Con, I was pretty excited to see it. But now I’m mostly just confused. Here’s why:

Man of Steel: Check out the Comic-Con Poster

2. There are two Man of Steel teaser trailers. One is narrated by Kevin Costner, who plays Superman’s earthly dad Jonathan Kent. The other is narrated by Russell Crowe, who plays Superman’s biological Kryptonian dad Jor-El. I guess maybe they’re supposed to show the different things tugging at Clark Kent/Superman. Can he choose to be a hero? Or is this a destiny he must follow no matter what?

3. What, what? Superman worked on a Deadliest Catch boat? Run for your life!