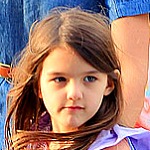 Katie Holmes is all smiles as she and Suri make their way through traffic on the streets of New York City yesterday. Word has it that the divorce settlement between Katie and Tom Cruise is a done deal, so we’re hoping that everyone gets a fair shake — especially little 6-year-old Suri.

According to the L.A. Times, the terms of the divorce will not be contained in public court documents. Katie will have primary custody of Suri, but Tom will still have a “meaningful relationship” with his child.

The agreement provides Tom with visitation rights, but gives Katie the lead role in choosing how Suri will be educated. Of course, speculation is high that the divorce was resolved quickly in exchange for Katie not trash-talking Scientology to the press.

It’s anyone’s guess, but the main thing is that Suri is taken care of and gets to have a relationship with both parents. And it certainly seems like that’s the case. Let’s hope so anyway!

Suri has that determined Tom Cruise look on her face here, doesn’t she? I’m guessing she won’t let anyone push her around, which is a good thing! She has a life in the spotlight ahead of her.