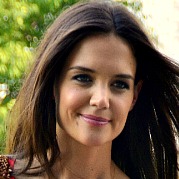 I must admit, I was a little sad when I heard Katie Holmes and Tom Cruise were in Splitsville. Even though he’s … quirky (I try to be nice here at Reel Life With Jane), they seemed like a cute couple, and little Suri is adorable.

But then I saw this recent picture of Katie Holmes, and wow, she looks like a new woman! I don’t think I’ve seen any pictures of her smiling during their marriage — you know, REALLY smiling — and here she looks like the weight of the world is off her shoulders.

I’ve heard the rumors about Tom’s controlling ways (really, Tom? All Katie gets is an Adam Sandler movie?), but the most entertaining part of the split (for us anyway – I’m sure Katie wishes it would all go away) is the Scientology rumors.

Word has it that Katie felt she was being followed, monitored and spied on by the Church of Scientology. There’s even a rumor that Tom wanted to give Suri to a hardcore Scientology group known as Sea Organization, a.k.a. Sea Org. Apparently, that’s where the highest levels of Scientology are taught, and kids as young as five are sent there to live … without their parents.

The Sea Org is often compared to a boot camp, and several ex-Scientologists (including Oscar winner Paul Haggis) are outspoken against its military-like conditions. The Freewinds, the massive Scientology boat that was the location of Cruise’s infamous birthday party in 2004, is entirely staffed by Sea Org members.

According to the official Scientology Web site, members of Sea Org sign “a one-billion-year pledge to symbolize their eternal commitment to the religion, and it is still signed by all members today.” When Tom and Katie first hooked up in 2005, Jessica Feshbach, a prominent Scientologist who’s been with the Sea Org since 1994, became Katie’s assistant/Scientology chaperone.

Yeah, I’d say all that is grounds for divorce (though it seems like Katie must have known what she was getting into from the beginning, don’t you think?).