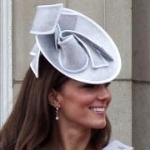 I know some people are really obsessed with the Royals. Not totally sure I’d put myself in that category, but I DO love seeing them during celebrations, like the recent Diamond Jubilee. And Kate Middleton and Prince William are adorable together. They seem like a great couple.

So there’s that. And there’s the fact that some people will pay big bucks to buy hats and clothes that Kate has worn. Two hats worn by the Duchess of Cambridge before her marriage to Prince William were recently sold at auction for fairly big bucks.

One, which she wore to a wedding in October 2010, went for the equivalent of $5,080 and the other for $5,030. Not bad for such a small accessory. Plus, both of the hats were rented, which I guess is par for the course when you live in the hat-obsessed UK.

The two hats were part of the Passion for Fashion auction held by Kerry Taylor, the same auction house which sold a dress of hers for £78,000 last year. Now that she’s married to William, however, auction houses are unable to put any of her clothes up for sale unless she sanctions a charity auction.

Also, Prince Charles reportedly picks up the tab for all work-related clothes that Kate wears, which is interesting but I guess makes sense if you’re part of the Royal Family.