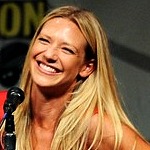 Some really fun stuff came out of Comic-Con last week, one of them being the possibility of a Fringe movie. With the legions of Fringies on Twitter, this news is making that little blue bird tweet gleefully.

Apparently, the trailer below was actually a sales tool to get a season five pickup from Fox. Production hasn’t even started yet. “We are trying to give you guys back so much because without you, we would not be here,” said Wyman. “This is the little show that could.” As someone who’s been glued to the show since day one, this cheers me greatly.

One of my favorite relationships on the show is that of Astrid and Walter. Nicole said her real-life relationship with John Noble translated on camera, ” so this beautiful connection evolved in the storytelling. Astrid’s first big episode was realized because of her relationship with the doctor. It was a lovely way to explore this burgeoning relationship. You saw how much heart she had. I could get killed off in my first show. And I didn’t die! I made it to the fifth season!”

When asked whether Fringe will live on after the show ends, Noble said, “If this season goes off as we think it will, I would think a film is very possible down the track.”

Hmmm… a very intriguing answer, and one I’m sure Fringe fans everywhere are savoring. I’ve been suspecting some sort of spin-off show to happen, but his comment makes me think the core characters might have cliff-hanger endings that could lead to a feature film. Either way, happy.