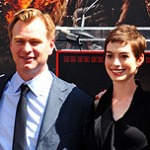 Uggie the Dog isn’t the only one getting his prints at Grauman’s Chinese Theatre.

Director Christopher Nolan (center) had the support of his The Dark Knight Rises cast during his hand and footprint ceremony yesterday at Grauman’s. From left in the photo below: Morgan Freeman, Gary Oldman, Christian Bale, Anne Hathaway, Michael Caine and Joseph Gordon-Levitt.

I love Anne Hathaway’s short ‘do! Also love that Morgan Freeman and Christian Bale look like they just came in from working in the garden. Yes, they really ARE just like the rest of us mere mortals.