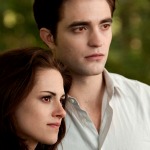 The first official trailer for The Twilight Saga: Breaking Dawn – Part 2 hit the interwebs today. Even with all the vampires and werewolves on the big and small screens lately, I’m STILL a fan of this series. Ok, I admit its cheese has only gotten stronger with each new installment in the franchise.

I don’t think I’m giving away any spoilers when I say that this movie brings us a baby named Renesmee (who quickly grows into a girl), a new vampire named Bella, a few cuddly wolves and some angry vampires.

My favorite parts of this trailer:

Thoughts on the trailer? Excited for the movie or just want it to be over?