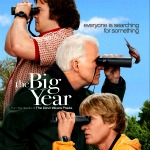 What do Steve Martin, Jack Black and Owen Wilson have in common? Other than the fact that they’re today’s comedic stars, they’re all featured in The Big Year, a movie about the competitive sport of birdwatching.

The Big Year (which is actually a real-life quest) is a national competition in which birdwatchers try to outdo each other in spotting different birds throughout North America in a single year. Owen Wilson plays Kenny Bostick, a construction owner with a child on the way. He holds the birdwatching record thus far, and his wife Jessica (Rosamund Pike) knows about his competitiveness and determination to win The Big Year. Wilson, who is a great improvisational actor, does the best he can with an empty script.

Stu Preissler (Steve Martin) is a 60-ish CEO of a major company. He has retired not once, but twice, and is looking for a challenge beyond the mundane day-to-day work life. JoBeth Williams, who plays his wife Brenda, has a lesser supporting role than Pike.

Finally, we have computer drone Brad Harris, played with exuberance by Jack Black. The newbie of the bunch, he took up birdwatching to try and dig out of the rut he’s been in since his wife divorced him six months ago. His disapproving dad, played with sternness by Brian Dennehy, thinks the competition is a waste-of-time get-rich scheme, but Brad sees it as an opportunity to make a difference in his life.

As the three men search for birds, they encounter problems along the way. Arrogant Bostick misses his wife’s sonograms and isn’t there to help set up the baby’s nursery. Preissler is never around for his own family, and Harris is dealing with a lack of funds, a job that needs him every minute of the day, and an overbearing father who has no faith in him.

As the men try to outwit each other, Preissler and Harris become friends and decide to work together, but Bostick is always five steps ahead of them. The movie has some pacing problems, and part-way into it, I was just waiting for it to end so I could find out who wins. Excellent locales and stunning photography add interest, and the stars do their best to liven up a dull script. There are also a few cameos, including Jim Parsons (The Big Bang Theory), Rashida Jones (Parks and Recreation), Anthony Anderson, and Angelica Huston. Given the cast and director David Frankel’s track record (The Devil Wears Prada, Marley & Me), I thought this movie would be a home run, but unfortunately, it fell short.