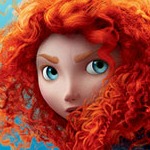 I have been a fan of Pixar ever since I was a young lad watching Toy Story on VHS tape. Pixar has made movies starring toys, monsters, robots, rats, cars, and fish. Brave goes beyond all of that and actually features a girl as the main character. I’m sorry for blowing your mind right there, but Pixar has always been a leader of innovation. Brave, however, prefers to play it as safe as possible.

Brave follows the story of Princess Merida from the clan of DunBroch in Scotland. The time has come for young Merida to be forcibly married to one of the sons from the allied clans. Her mother, Queen Elinor, gives her little choice in the matter as the Queen is big on tradition. Merida ignores the advice of her Disney princess peers and instead watches The Hunger Games on Blu Ray. Merida much prefers the horseback riding and archery of her warrior father than the table manners and stereotypical gender roles of her mother. Merida finds a way out of marriage by meeting a witch in the woods. The witch helps Merida with a magic spell, but things don’t go quite as Merida had hoped. Hilarity ensues.

The story probably sounds familiar because it is almost as old as Scotland’s rock formations. The crux of the story is essentially a “be careful what you wish for” scenario sprinkled into a rebellious teen situation. There isn’t anything wrong with that, but I was hoping Pixar would do something more with the characters and setting. The weakest point of the entire film is a lack of a good villain, or any villain at all really. Queen Elinor is a loving mother who is just a bit mixed up. The witch only casts the spell and then leaves the movie. The “villain” of Brave is ultimately the sin of pride that all of mankind harbors inside. It is quite anticlimactic.

Despite its pedestrian plot, Brave is still a great movie. Kelly Macdonald provides the voice of Merida, and she is as fantastic in this film as she is in Boardwalk Empire. As a bonus, she finally gets to play a Scot in Brave rather than an Irish lass. The other star to me is Billy Connolly as Merida’s father, King Fergus. He is a loveable character that provides the keystone to the believable family unit that is the DunBroch clan.

Brave gets serious at times and whimsical at others. The humor in Brave is closer to slapstick and funny faces than the more grownup humor of The Incredibles or Toy Story 3. Parents will get some chuckles out of Brave, but this movie seems to be primarily for the younger generation. Brave is good for all ages, but those with a phobia of bears will need to be a bit more courageous.

Without a doubt, the best thing about Brave is the visuals. This is a beautiful movie, and your eyeballs will fall in love with your brain for deciding to watch it. As DVD commentaries will tell you, two of the hardest things to do in computer effects are fabric and hair. Merida has an abundance of messy red curls and flowing gowns and dresses. It’s obvious that Pixar is just showing off at this point. When it comes to animation, there is Pixar, and then there is everybody else.

The music is also both impressive and appropriate. The songs fit the Scottish setting of the film and are catchy, as well. The film doesn’t actually have musical numbers in it, but there are two songs that come pretty close. Nothing especially important is going on while these two songs play, almost as if to avoid interrupting the pleas for you to go out and buy the soundtrack.

Brave sounds good, feels great, and looks amazing. Sadly, it appears as though Pixar spent all of their Originality Points on a strong female lead and didn’t have any left for the story. The film doesn’t suffer badly for it, but Brave probably won’t be remembered as lovingly as Toy Story 3 or Finding Nemo. I don’t think Brave is a bad movie. In fact, Brave is a great movie that will entertain you the whole way through. Just don’t expect it to set the world on fire.