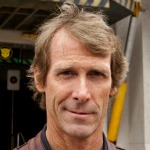 Michael Bay and BFFs Optimus Prime and Bumblebee checked out Transformers: The Ride 3D at Universal Studios Hollywood. Wonder if there were enough explosions for him. And doesn’t he look tiny next to those massive ‘bots?! Love the pointy boots.

More Transformers action is in the works with a new video game, Transformers: Fall of Cybertron, due in August and another movie coming up. Bay says this fourth film will include some redesign of the robots and an entirely new cast. He also said it will be his last.

I’m guessing he won’t reinvent himself with arthouse films that play well on the film festival circuit, but stranger things have happened.