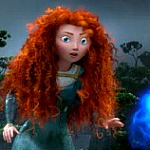 Brave is my favorite family movie so far this year. There have been some stout contenders — The Secret World of Arrietty, Big Miracle, The Avengers and The Hunger Games, among them. I’m not sure if The Hunger Games qualifies as a family movie. Still undecided on that, but because of its huge fanbase of teens who’ve read all the books, we’ll put it in the family category. I read the books, too, and loved both them and the movie.

But Brave? That’s clearly a family movie, and people of all ages will find something to love about it. In our review here on Reel Life With Jane, John Dempsey calls the movie “simply beautiful.” In my review for my syndicators (read it over at Mommasaid.net), I said I loved everything about Brave.

Let’s get a little more specific. Here are five reasons why Brave is the best family movie of 2012 (so far anyway!):

1. A brave female heroine. Merida (voiced by Kelly Macdonald), the teenage princess who’s trying to buck tradition and be her own girl, is strong, opinionated, and yes, brave. I love that this is a Disney princess story focused on the girl’s own personal development rather than her romantic interests. We’ve seen this before in movies like The Princess and the Frog and Tangled (two of my favorite family movies), but Brave takes it to a new level, and shows that even in a kingdom steeped in Scottish tradition, there’s still room for change.

2. Merida’s fiery red hair. Her hair is curly and wild, and it made me want to revert back to the 1960s so my hair could be curly and wild, too. What’s with all the straightening these days? Why can’t we just let our hair be what it wants to be? My hair is already red, so if I left it alone, it would probably look much like Merida’s mane. As John mentioned in his review, hair like Merida’s is tough for an animator, but well worth the trouble for our viewing experience.

3. Stunning animation. The animation in Brave is so beautiful it made me want to weep — from the aforementioned blazing red hair to lush landscapes and haunting blue will-o’-the-wisps. Crisp and gorgeous, this is Pixar animation at its best. One scene finds Merida riding her horse into the forest and climbing a steep cliff, where she quenches her thirst at a sparkling waterfall. Oh to be part of that scenery.

4. A thoughtful mother-daughter storyline. Much of Brave centers around Scottish tradition and Merida’s desire to break free. She’d rather ride free in the wilderness than learn all the manners and protocol befitting a queen, as her mother had done before her.  There is tension, an ill-advised curse, and the eventual coming together to respect each other for who they are. It’s a story many moms and daughters will find familiar (except for the curse part, hopefully).

5. Beautiful Celtic music. My friend Kerry Dexter covered the music for Brave at her wonderful site, Music Road. Of the award-winning Gaelic singer Julie Fowlis, whose music is featured in the film, Kerry writes, “…when she answered the telephone at home in Scotland, she wasn’t thinking the call would be from Disney/Pixar Studios in California. As it happened, each time the production team came to Scotland to do research, they bought loads of music recordings and took them back to California to listen. Fowlis’ music, they told her, just kept coming to the top of the stack.”

Listen to Julie’s beautiful voice in the trailer, and tell me in the comments below what you loved about Brave. Did I hit all the high points?