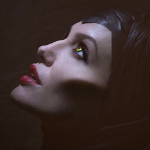 Here’s our first look at Angelina Jolie as Maleficent. At first I wondered what could be so darn interesting up there, and then I decided that her pointy-eared hat is probably making it difficult to keep her head level. It does hark back to the original evil queen in the 1959 animated tale, though.

At any rate, this is Walt Disney Pictures’ retelling of the classic fairy tale Sleeping Beauty, only told from the perspective of the princess’ evil nemesis, Maleficent, a.k.a. the Mistress of All Evil. Not to read anything into this, but Jolie seems born to play this part, doesn’t she?

Maleficent is scheduled to hit theaters on March 14, 2014.