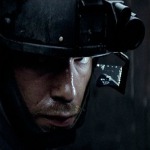 Back on May 22, Tom Clancy’s Ghost Recon: Future Soldier was released. This video game is the fifth in a series of games that details the actions of a fictional United States special operations squad. Anyone familiar with Tom Clancy or his work will not be surprised that the Ghost Recon series features plenty of military jargon, impressive gunplay, and futuristic gadgets. In an effort to promote the video game, Ubisoft has released a prequel film called [amazon_link id=”B005V4X92Q” target=”_blank” container=”” container_class=”” ]Tom Clancy’s Ghost Recon Alpha[/amazon_link]. The film is good but it is also very confusing for many reasons.

Tom Clancy’s Ghost Recon Alpha follows a special ops squad of American soldiers called Ghosts. The squad consists of an engineer called Chuck, a sniper called Pepper, a weapons specialist called 40K, and a ghost leader called … Ghost Leader. The Ghosts are tasked with a mission to disrupt a deal between a notorious weapons smuggler and a war criminal. The entirety of the film consists of watching them do their mission as amazingly as humanly possible.

Tom Clancy’s Ghost Recon Alpha bills itself as a movie but it is much more like a short film, clocking in at about 20 minutes. Those 20 minutes contain some of the most impressive visual effects I have seen recently. The Ghosts use a ton of awesome gadgets, including holographic displays, a remote controlled attack drone, and a sheet that can make a soldier invisible. According to the director, this magical sheet is actually being prototyped by military scientists and is really called an “invisibility cloak.” It is nice to know that Harry Potter has a promising future in the military if that wizarding thing doesn’t work out.

While the effects are impressive, the rest of the “movie” is nothing to write home about. There is almost no backstory or plot, and the dialogue is almost entirely composed of military lingo and painful grunts. You can’t tell who anybody is or why the Ghosts need to complete this mission in the first place. Anybody hoping to emotionally connect with the Ghosts is going to be sadly disappointed. I was waiting for Ghost Leader to give me a reason to care about him, but he couldn’t even be bothered to give me a first name. He is so selfish. I watched Tom Clancy’s Ghost Recon Alpha as part of the Blu Ray Combo Pack that also includes the film on DVD. The only special feature is a behind-the-scenes look at the making of the movie that is longer than the movie itself. This special feature is cool and informative, but does not even come close to justify purchasing a Blu Ray pack to watch it. You see, the actual short film of Tom Clancy’s Ghost Recon Alpha can be watched for free on YouTube on Ubisoft’s official channel right here. Since the film itself is available for free, you’re basically buying this DVD for the lone special feature. Honestly, I wouldn’t be shocked if the behind-the-scenes stuff isn’t on the Internet for free somewhere either.

Tom Clancy’s Ghost Recon Alpha on Blu Ray is only for the most diehard of Tom Clancy fans. You’ll pay about $15 for a 20-minute short film and a 28-minute documentary about that short film. I can confidently say that your money is best spent elsewhere.