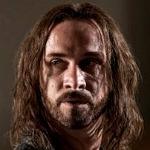 Steven Spielberg returned once again to working with aliens as the executive producer of the TNT show Falling Skies. Season two of the show begins June 17, 2012, but season one is out right now [amazon_link id=”B004LROMX4″ target=”_blank” container=”” container_class=”” ]on DVD and blu-ray[/amazon_link]. This show has many moments of mystery, terror, suspense, and melodramatic acting. The aliens want to abduct humans, but you might not want to abduct this DVD set.

Falling Skies follows the story of Tom Mason (Noah Wyle) and a ragtag group of civilians who are trying to survive being killed by aliens. Tom Mason used to teach biology but now has a doctorate in running from aliens and growing shaggy beards. The aliens, called Skitters, are murdering adults and kidnapping children to use as slave labor. They have already kidnapped Tom’s son, Ben, and he will do whatever it takes to get him back.

The show divides its time between showing fights with aliens and showing characters fight metaphorical battles with their own problems. While Tom fights against the aliens, he also has to find time to bond with his sons since the aliens have made him a single dad. His eldest son, Hal (Drew Roy), rides a motorcycle and spends most of his time questioning his dad’s foolish decisions. The youngest son, Matt (Maxim Knight), spends most of his time nagging and forgetting about murderous aliens. The middle son, Ben (Connor Jessup), is busy being a mind-controlled slave.

The rest of the characters range from generic to uninspired. Tom is constantly at odds with Captain Weaver (Will Patton), who has a subscription to Gruff Military Man Monthly. The various soldiers guarding the school used as a home base either only have first names or die. The only interesting character is a marauding convict named Pope, played by Colin Cunningham (pictured below). Pope enjoys the apocalypse because he finally has intelligent things to hunt and kill. He is a bad man, and we aren’t supposed to like him. However, it’s hard not to when the other characters constantly make increasingly foolish decisions or constantly have petty squabbles. What really makes the show compelling is the aliens. The Skitters’ motives for invading Earth are shadowy and mysterious. As the season goes on, every new detail you learn about them only raises five more questions. The CGI used on them is also impressive. The Skitters are six-legged insectoid creatures that resemble the Prawns from the movie District 9. They are ugly, but not too ugly. They are creepy, but you still want to learn their motives rather than just hope they’re all killed by the boring humans. Unfortunately, menacing aliens and deadly space weapons come at a price. Certain episodes don’t feature any aliens at all, most likely to save money for other episodes that feature a lot of shooting and explosions.

You would primarily buy this DVD to get into the show for the first time or to have all of the episodes if you’re a fan. The extra features mostly boil down to audio commentaries. The DVD also includes a panel with the actors at Comic-Con, a look at how they make the Skitters on the computer, and a very short preview of season two. Besides the commentaries, the features are brief and don’t offer much extra information from just watching the episodes. If you like commentaries, about half of the episodes have them available. If you don’t care about commentaries, you’re just paying for the episodes and a tiny bit of extra stuff.