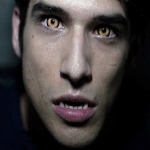 The original Teen Wolf was a 1985 comedy starring Micheal J. Fox about a high school werewolf who cracked wise and was amazing at basketball. The 2011 TV series also called Teen Wolf, released on DVD May 22, 2012, is a dramatic love story about murderous werewolves in California. I’m not quite sure why MTV felt the need to connect these two very different stories by using the same name. It was probably for the same reason that the network is called MTV despite not having much programming that qualifies as either “music” or “television.”

The 2011 Teen Wolf is the story of Scott McCall (Tyler Posey), who lives in a fantastical world where werewolves exist and high schoolers are played by actors in their mid 20’s. Scott gets bitten by a werewolf while hanging out with his friend in the woods instead of doing homework or contributing back to the community. Scott decides to use his new werewolf superpowers to pick up girls and cheat at sports. As it turns out, being a werewolf isn’t all fun and games. During the full moon, Scott will lose control and murder someone. There also happens to be a family of werewolf hunters living down the street from him. He soon falls in love with a member of this family. The werewolf that bit him is also going around murdering people. Even worse than any of that, Scott is worried about whether or not girls will like him. At least he has his priorities straight.

I originally thought this series would be horrible for several reasons. It is on MTV. It has teenage werewolves in it. One episode features a game of lacrosse. All of those things sound painfully unpleasant. After watching the DVD, I am glad to see that I was wrong. For the most part. All of the actors do a good job and the characters are both believable and relatable. The dialogue actually sounds like something teenagers would say and not what 40-year-olds think they would say. It manages to be dramatic at times, funny at others, and suspenseful when it matters the most. Nobody swears but the violence and disturbing dream sequences get close to the limit of what is allowed on television at times. Trust me when I say that there will be blood.

While the story and characters are good, the show does drop the ball at times. The special effects are not going to set the world on fire. The executive producer complains of the low budget of the show numerous times during the DVD commentaries, and I’m guessing they had to skimp on the CG. The heroic werewolves here resemble the cheesy wolfmen from the 1930’s rather than the vicious four-legged killers of more modern cinema. The evil werewolf that tries to kill Scott on several occasions looks more gorilla than wolf, and isn’t all that scary.

However, my biggest problem with this show is a confusing emphasis on what is really important. The show presents two simultaneous conflicts of an evil werewolf killing random people and Scott having relationship problems. MTV seems to think that these two issues are equally as interesting and important. I respectfully disagree with them. There are multiple points in the show where Scott intentionally avoids preventing a werewolf from killing people because he is too busy worrying about his girlfriend problems. At least there aren’t any angsty vampires.

The DVD special features include the usual collection of commentaries from the director, actors, and other members of the crew. The commentaries are insightful, and you’ll learn a lot about filming techniques and how many corners production crews have to cut to make TV shows on the cheap.

The DVD also includes bloopers, interviews with the cast, and clips of the actors on the red carpet. Most importantly, the DVD includes a slow motion montage of all the moments during Season One where the male actors are shirtless. I am not joking. That is a real thing that somebody somewhere felt the need to put onto a DVD. I would make fun of this more if Twilight hadn’t dedicated four movies to doing this exact same thing.

I can confidently say that Teen Wolf is the best thing to happen on MTV in at least 20 years. I realize that is barely a compliment, but the DVD is definitely worth picking up. The series is an entertaining watch, and the DVD has enough extra goodies to justify a purchase. While you’re at it, take the time to pick up the 1985 Teen Wolf, as well. It might be fun to see how different teenagers have become in 30 years. Sadly, the werewolves are still just as unruly.