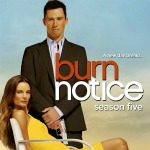 Happy Summer! Which means fun new seasons of your favorite summer shows on the USA network. We love the USA network here at Reel Life With Jane and are happy to be giving away a couple of those shows.

TO ENTER: Leave a comment on this post by midnight on Saturday, June 23, 2012. A winner will be chosen at random and emailed for their mailing address. Winner takes both shows. Good luck!

1. Burn Notice, Season 5. Master-spy Michael Westen (Jeffrey Donovan) has just rejoined the CIA as consultant, but after being framed for the murder of a close friend, partners with Kim Pearce (Lauren Stamile) to clear his name. After increasingly dangerous and criminal missions, Michael comes face to face with the man who burned him and the one closest to him who knew about it all along.

Bonus features include an extended episode, deleted scenes, a gag reel and a featurette on the villains of Burn Notice. Fans will celebrate the best of the worst by exploring the Burn Notice bad guys and get unique insights from the actors who play them along with a snarky rebuttal on their deeds from star Bruce Campbell (@groovybruce).

Here’s a promo from episode 17, “Acceptable Loss.” Follow the show on Twitter @BurnNotice_USA, and check out their official site.

2. White Collar, Season 3. White Collar focuses on the unlikely partnership between charming con artist Neal Caffrey (Matt Bomer) and straightman FBI agent Peter Burke (Tim DeKay). In exchange for his freedom, Caffrey offers his expertise to help Burke catch elusive criminals. Just goes to show that in order to solve the toughest crimes, you have to hire the smartest criminal.

Bonus features include deleted scenes, a gag reel, commentary on “Judgment Day,” a White Collar trivia challenge, and a hilarious intervention caught on tape by the cast and crew with showrunner Jeff Eastin who’s overzealous tweeting gets out of hand (I follow him — @jeffeastin — and he is quite the Twitter maniac).

Here’s Matt Bomer talking about the decisions that Neal Caffrey makes in season three. Follow the show on Twitter @WhiteCollarUSA, and check out their official site.