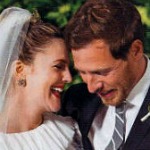 Drew Barrymore hasn’t had the easiest life. During her troubled childhood, she was a regular at the famed Studio 54 club, smoked cigarettes at age nine, drank alcohol by the time she was 11, smoked pot at 12, and snorted cocaine at 13, at which time she entered rehab.

A suicide attempt at 14 put her back in rehab, followed by a three-month stay with singer David Crosby and his wife, precipitated, Crosby said, because she “needed to be around some people that were committed to sobriety.” The next year, following a successful juvenile court petition for emancipation, she moved into her own apartment.

Needless to say, she had to learn early on to be self-reliant, avoid falling into the usual Hollywood trappings of fame and fortune, and rely on her own instincts to forge her path. She seems to have done all of the above, and at 37, she’s charming, free-spirited and talented — not to mention married, as of Saturday, June 2, 2012.

The blushing (and pregnant!) bride was featured on the cover of People magazine, with more photos of her wedding to Will Kopelman inside. The two were married at her estate in in Montecito, California, with Drew wearing Chanel jewelry and a custom long, white Chanel dress pleated in muslin and organza, created for her by Karl Lagerfeld.

Accentuated at the waist by a black satin belt, the dress also had flowers embroidered in organza, muslin, tulle and feathers along the skirt of the dress. I admit the dress looks a little old-fashioned (comments on the interwebs range from “grandma dress” to “sweater dress”), but I think it’s the perfect gown for eclectic Drew. After all, it’s HER day. She can wear whatever she wants.

“The day was perfect,” she told People magazine after walking down the aisle. “Everyone we love and care about was there. It was as fun and meaningful as we ever could have hoped.”

There’s something about Drew Barrymore that makes me happy. I’m not sure if it’s her enthusiasm for life, her cheery outlook, or the fact that she’s a self-made woman — something that probably seemed impossible to that troubled young teen so long ago.

Drew Barrymore is an inspiring role model for women everywhere (and I don’t even care that she’s a pregnant bride – it’s the 21st century, people).